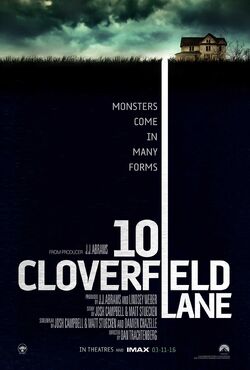 10 Cloverfield Lane is a 2016 American science fiction mystery thriller film directed by Dan Trachtenberg (directorial debut), written by Josh Campbell, Matthew Stuecken, and Damien Chazelle and starring Mary Elizabeth Winstead, John Goodman and John Gallagher, Jr. Originally conceived from a script titled "The Cellar," during production under Bad Robot Productions it evolved to become what producer J. J. Abrams has described as "a blood relative" of the 2008 film Cloverfield. The film was released in North America on March 11, 2016.

It is the second entry in the Cloverfield film franchise.

Waking up from a car accident, a young woman finds herself in the basement of a man who says he's saved her life from a chemical attack that has left the outside world uninhabitable.[1]

Retrieved from "https://movies.fandom.com/wiki/10_Cloverfield_Lane?oldid=189473"
Community content is available under CC-BY-SA unless otherwise noted.