View src
watch 02:24
Wiki Targeted (Entertainment)
Do you like this video?
Play Sound
1917 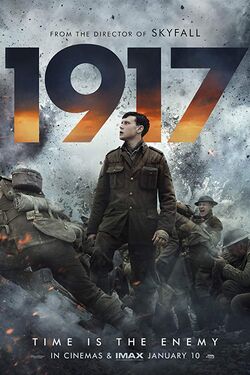 The film was released on December 25, 2019 by Universal Pictures.

At the height of the First World War during Spring 1917 in northern France, two young British soldiers, Schofield (George MacKay) and Blake (Dean-Charles Chapman), are given a seemingly impossible mission to deliver a message which will warn of an ambush during one of the skirmishes soon after the German retreat to the Hindenburg Line during Operation Alberich. The soldiers race against time, crossing enemy territory to deliver the warning and keep a British battalion of 1,600 men, which includes Blake's brother, from walking into a deadly trap. The pair must give their all to accomplish their mission by surviving the war to end all wars.