watch 02:03
Wiki Targeted (Entertainment)
Do you like this video?
Play Sound
2012: Ice Age 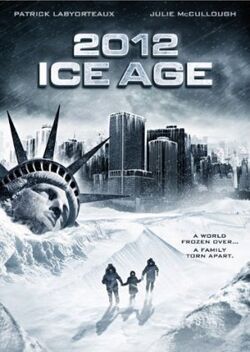 2012: Ice Age is a 2011 disaster film produced by the independent film group The Asylum. It is the third and final film in The Asylum's 2012 trilogy, which are mockbusters of the Roland Emmerich film 2012.

Bill Hart and his son, Nelson drive his daughter Julia to the airport. Bill contacts Dr. Divya who informs Bill a team of scientists he works with has left Iceland. Divya is able to tell Bill an entire range of volcanoes has erupted and a 200-mile long ice shelf is breaking apart before he is killed by the volcanic eruptions. While Bill is distracted, Julia heads into the airport. At his office, Bill is advised to leave Maine and head to the West as soon as he can to avoid the destruction of the glacier. Bill and Nelson head to the Senator’s office and pick up his wife Teri. The glacier travels at high speeds, races towards the East Coast of North America, bringing heavy snow and giant hail. The Air Force attempts to break apart the glacier with aerial attacks, but fails.

The glacier rushes on, destroys Boston, Massachusetts and races towards New York City. In Connecticut, Bill meets a California bound Gary, who is stranded with no car. Bill tries to appease Gary with food, but gives up the van when Gary threatens the family. Gary races on, only to crash into a river and sink. On foot, the Harts walk across the frozen river and enter a seemingly empty home. The Harts gather food and coats, when a young boy asks them to help his father. He leads them to the garage where his father is pinned down by a fallen shelf. They free Gerald and are offered a ride to the West. Bill declines stating they must go to New York to find their daughter. Bill and his family take the Gerald’s light aircraft, flying through snow and tornadoes.

In New York, Julia meets up with her boyfriend Logan and goes to her dorm. After learning about the glacier, Julia and Logan leave the dormitories and attempt to travel through subway tunnels. They at one point find themselves inside the Lincoln Tunnel and travel through it to New Jersey. Eventually they return to the surface, where a national guardsman tells them the city has been evacuated. He takes them to an evacuation shelter.

While on the plane, the Harts witness a second failed Air Force attempt to break the glacier. When the plane runs out of fuel (from a leak), Bill makes an impromptu landing. Shortly after exiting the plane, it explodes and an air traffic controller leads them to a hangar for safety. The Harts find a car and leave the hangar, tracking Julia’s phone to discover that she is only a few miles away. They eventually abandon the car and search on foot. Julia and Logan remain outside in an alley. Julia is reunited with her family. The Harts and Logan head back to the car and drive across the frozen New York Harbor to the Statue of Liberty.

Retrieved from "https://movies.fandom.com/wiki/2012:_Ice_Age?oldid=84394"
Community content is available under CC-BY-SA unless otherwise noted.