Moviepedia
Register
Don't have an account?
Sign In
Advertisement
in: Film articles without a specified rating, 2014 films, Comedy films,
and 14 more

22 Jump Street is a 2014 American comedy film produced by and starring Jonah Hill and Channing Tatum , scripted by Michael Bacall and Oren Uziel, from a story by Jonah Hill and Michael Bacall, and directed by Phil Lord and Chris Miller. It is the sequel to 2012's 21 Jump Street, based on the 1987 television series of the same name by Stephen J. Cannell and Patrick Hasburgh. The film is scheduled to be released on June 13, 2014, by Columbia Pictures and Metro-Goldwyn-Mayer. 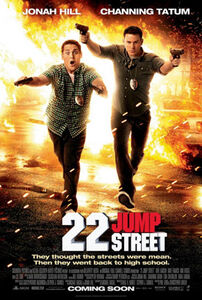