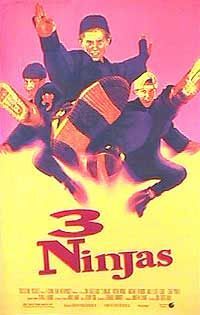 3 Ninjas is a 1992 American martial arts comedy film directed by Jon Turteltaub, starring Victor Wong, Michael Treanor, Max Elliott Slade, and Chad Power. It was the only 3 Ninjas film released by Touchstone Pictures, while the others were released by TriStar Pictures. The film is about three young brothers who learn martial arts from their Japanese grandfather.

Each year, Samuel (Michael Treanor), Jeffrey (Max Elliott Slade) and Michael Douglas (Chad Power) visit the cabin of their Japanese grandfather Mori Tanaka (Victor Wong) for the summer. Mori is highly skilled in the art of Ninjutsu, and for years has trained the boys. This year, Mori presents the boys with new "ninja names": Samuel becomes "Rocky", Jeffrey becomes "Colt", and Michael becomes "Tum Tum". Meanwhile, the boys’ father, Sam Douglas (Alan McRae), leads the FBI on a sting operation against Hugo Snyder (Rand Kingsley), to buy warheads. Snyder escapes because ninjas were in the rafters. When he returns to his hideout, he explains his relationship with Sam to his assistant Mr. Brown (Joel Swetow) and bodyguard Rushmore (Professor Toru Tanaka). He has known Douglas for years, since his former master Mori Tanaka trained him. On their last day at the cabin, Snyder arrives to test his old master by sending ninjas after him. Defying their grandfather's orders to stay in the house, the boys fight a few of the ninjas. After they are victorious, Snyder threatens Mori and his family’s lives if he does not get Douglas off his back; he also threatens to rip out his heart if he does not. When the boys return home, their father is talking to his partner Jerry. Douglas hates martial arts, despite having married Mori's daughter Jessica (Margarita Franco) so he is not enthusiastic when the boys try to show him what they learned, and more irritated when they explain their Ninja names. Snyder arranges to kidnap the boys and tells Brown to hire his surfer nephew Fester (Patrick Labyorteaux) and his friends Hammer (D.J. Harder) and Marcus (Race Nelson). The next morning as the boys ride their bicycles to school, Fester and his crew fail to grab them. Emily becomes separated from the boys and has her bike stolen by bullies. She becomes mad at Rocky for showing off and walks the rest of the way to school. At recess, Colt and Rocky challenge the bullies to a game of basketball. Giving the bullies a 9 point lead they effortlessly win Emily's bike back. Meanwhile, frustrated Snyder tells Fester and his buddies to get the children before midnight, prompting Brown to aid as backup if needed. The boys are at home with a babysitter when Fester, Marcus and Hammer show up. The kidnappers subdue the babysitter and lock her in a closet. The boys decide if they can take care of Fester and his gang themselves, then their ninja training would be worthwhile. Using booby traps, they weaken the intruders but the criminals take Emily (Kate Sargeant) hostage. Fester, alone with Emily, confronts Colt and Rocky, when Tum-Tum suddenly attacks and Emily subdues Fester. When they free the babysitter, Brown and Rushmore overpower and capture them. Sam, Jessica, and Mori learn from a note Emily gives them that Snyder is responsible. Mori then offers to sneak in and rescue them. Mori slips into Snyder's hideout (which is a large freight ship in dock), while the boys trick their guard and escape. After several confrontations through the ship they come across Rushmore, whom they defeat with Mori’s help. Mori reunites with the boys, as Snyder confronts Mori. Mori is manhandled throughout the fight since Snyder is much younger. When it seems that Snyder is about to win, Mori remembers the jelly beans that Tum Tum had given him for good luck and uses them to gag Snyder. Mori gains the upper-hand and phases Snyder, more or less winning the fight. In frustration, Snyder grabs a gun from one of his subordinates and takes aim at Mori. At that moment, Sam shoots Snyder in the arm from the top of the ship (he and a large SWAT team had surrounded the ship as Snyder and his guards were distracted with the fight against Mori and the boys). As the group is receiving medical aid, the FBI takes Snyder and his men to jail. Sam apologizes to Mori, and tells Jerry to fill out the reports himself because he had a whole family of heroes he needed to take out for pizza.

The international cut of the film features a number of small parts of scenes that were cut from the movie for its American release, most likely to ensure a PG rating. Amongst the cut scenes are [not all-inclusive]: Extra footage of Snyder's escape in which he confronts two FBI agents who he promptly defeats, A scene in which the robbers fire a gun in the convenience store and tie up the clerk behind the counter, a scene in which the robbers get the Douglas family address from Brown, additional footage of Grandpa trailing Snyder to his ship hideout, numerous small portions of the scene where the robbers invade the Douglas household, including Colt beating the robbers after getting them under a tarp in the room being renovated and a scene of one of the robbers asking his uncle (Brown) if he can be paid, extra sarcastic dialogue while the boys are locked up in Snyder's ship, an extended scene in which the boys are reunited with Grandpa, footage of Brown KOing himself on a pipe and subsequently complaining about his pain when being taken away by the Feds. Additionally, in the international version the boys LOSE the basketball challenge and their bikes, so a scene ends the international version of the film in which they fight the bullies to get them back.

Critics were mostly negative about the movie. It currently holds a 17% rating on Rotten Tomatoes.[1][2] However, it did well at the box-office, received a cult status and three sequels 3 Ninjas Kick Back, 3 Ninjas Knuckle Up and 3 Ninjas: High Noon at Mega Mountain.

The movie opened at the box office in the #4 position, and by the end of its 6-week run in theaters grossed $29,000,301 USD domestically.[3][4] Considering that the film was budgeted at $2.5 million, it was a huge financial success, and turned out to be the most profitable film of the year in terms of cost-to-gross ratio.[5]

Wikiquote has a collection of quotations from or about:
3 Ninjas

Retrieved from "https://movies.fandom.com/wiki/3_Ninjas?oldid=119674"
Community content is available under CC-BY-SA unless otherwise noted.