View src
watch 03:36
Wiki Targeted (Entertainment)
Do you like this video?
Play Sound
42 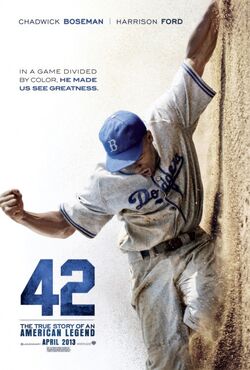 42 is a 2013 biographical film about the life of American legend and baseball player Jackie Robinson. It is directed by Brian Helgeland and star Chadwick Boseman as Robinson. It released on April 12, 2013.

The powerful story of Jackie Robinson, the legendary baseball player who broke Major League Baseball's color barrier when he joined the roster of the Brooklyn Dodgers. "42" will star Academy Award nominee Harrison Ford ("Witness") as the innovative Dodger's general manager Branch Rickey, the MLB executive who first signed Robinson to the minors and then helped to bring him up to the show, and Chadwick Boseman ("The Express") as Robinson, the heroic African American who was the first man to break the color line in the big leagues.