Start a Wiki
watch 01:16
The Loop (Movies)
Do you like this video?
47 Meters Down: Uncaged 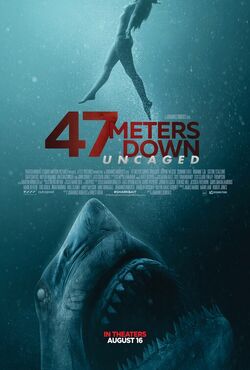 47 Meters Down: Uncaged is a 2019 survival horror film directed by Johannes Roberts. The cast of the film consists of John Corbett, Nia Long, Sophie Nélisse, Corinne Foxx, Sistine Stallone, Brianne Tju, Davi Santos, Khylin Rhambo, and Brec Bassinger. It serves as a sequel to the 2017 film 47 Meters Down.

The film was released in the United States on August 16, 2019 by Entertainment Studios Motion Pictures.

The film follows the story of four teen girls scuba diving in a ruined underwater city, who quickly find themselves in a watery hell as their adventure turns to horror when they learn they are not alone in the submerged caves. As they swim deeper into the claustrophobic labyrinth of caves they enter the territory of the deadliest shark species in the ocean.

Retrieved from "https://movies.fandom.com/wiki/47_Meters_Down:_Uncaged?oldid=178106"
Community content is available under CC-BY-SA unless otherwise noted.