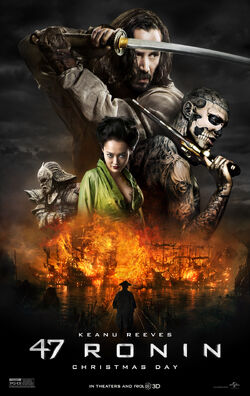 47 Ronin is a 2013 American fantasy action film depicting a fictional account of a real-life group of 18th-century samurai who avenge the murder of their master. Directed by Carl Erik Rinsch, stars include Keanu Reeves, Rinko Kikuchi, Tadanobu Asano, and Hiroyuki Sanada among others.

Currently, the release date is set for Christmas Day, 2013

After a treacherous warlord kills their master and banishes their kind, 47 leaderless samurai vow to seek vengeance and restore honor to their people. Driven from their homes and dispersed across the land, this band of Ronin must seek the help of Kai (Reeves) - a half-breed they once rejected - as they fight their way across a savage world of mythic beasts, shape-shifting witchcraft and wondrous terrors. Snek no snaki