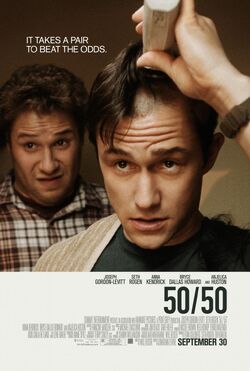 50/50 is a 2011 American comedy-drama film directed by Jonathan Levine with a script from Will Reiser. The cast of the film consists of Joseph Gordon-Levitt, Seth Rogen, Anna Kendrick, Bryce Dallas Howard, and Anjelica Huston.

The film premiered at the Toronto International Film Festival on September 12, 2011. It was released in the United States on September 30, 2011 by Summit Entertainment.

Adam Lerner (Joseph Gordon-Levitt) is a 27-year-old public radio journalist in Seattle with girlfriend and artist Rachael (Bryce Dallas Howard) of whom best friend and co-worker Kyle (Seth Rogen) disapproves. While Kyle is brash and outspoken, Adam is more introverted and mild-mannered.

After experiencing harsh pains in his back, Adam is diagnosed with schwannoma neurofibrosarcoma, a malignant tumor in his spine, and must undergo chemotherapy. He sees on the Internet that survival is 50/50. After Adam reveals this, his overbearing mother, Diane, who nurses her Alzheimer's-stricken husband Richard, offers to care for him but Adam declines, as Rachael has already promised to take care of him.

While at one of his treatments, Adam meets Mitch and Alan, two older cancer patients also undergoing chemotherapy, and they become friends. Rachael is uncomfortable during his treatments and is often late to pick him up. She also gets him a retired racing greyhound as a pet, named Skeletor. Throughout Adam's struggle, Kyle attempts to maintain his morale, helping Adam shave his head and openly using his illness to pick up women. While on a date, Kyle sees Rachael with another man at a gallery and takes a photo, later forcing her to confess to infidelity by showing it to Adam, who breaks up with her. He starts to follow Kyle's advice, using his illness to successfully pick up two women at a bar.

Meanwhile, Adam is being treated by a young, inexperienced therapist, Katherine McKay (Anna Kendrick), a PhD candidate doing the clinical aspect of her thesis at the hospital. Although their relationship and sessions begin unevenly, he slowly begins to open up to her. After she drives him home after one of his chemo sessions, the two develop a rapport, blurring their professional and personal relationship. She helps Adam understand his mother's situation and that even loved ones feel just as much stress as the patient, which helps Adam repair the rift between him and his mother.

After Mitch dies, Adam's fear of his potential death and future surface as he is subsequently informed that he needs to undergo surgery. The night before, Adam argues with an intoxicated Kyle, demanding that he drive even though he cannot. After a near miss, Adam breaks down and berates Kyle for seemingly not taking him seriously and using it for his own gain. Adam calls Katherine and tells her that he wishes he had a girlfriend like her, but also says he is tired and just wants it to be over. That night, Adam stays at Kyle's and finds a book entitled 'Facing Cancer Together' from their first trip to a bookstore where Kyle picked up the shop clerk—filled with notes, highlighted paragraphs and turned-down pages, proving that Kyle sincerely cares and has been simply continuing to treat Adam the same since his diagnosis.

The next day, Kyle drops Adam off, who embraces Kyle for being a good friend and apologizes for the previous night. After Adam says his farewells to family, he undergoes the surgery. During the wait, Katherine goes to the waiting room and inadvertently meets Adam's family and Kyle. After the surgery, Kyle, Diane, and Katherine are told that although the bone degradation was worse than they had thought, the tumor was removed successfully, and that Adam will recover.

Some time later, Adam is getting ready for a date with Katherine, while Kyle encourages him and cleans the incision on Adam's back from the surgery. The doorbell rings and Adam lets Katherine inside. After Kyle leaves, Katherine asks, "Now what?," and Adam simply smiles — at last being free of cancer.

Retrieved from "https://movies.fandom.com/wiki/50/50?oldid=178542"
Community content is available under CC-BY-SA unless otherwise noted.