watch 00:59
The Loop (Movies)
Do you like this video?
A Bad Moms Christmas 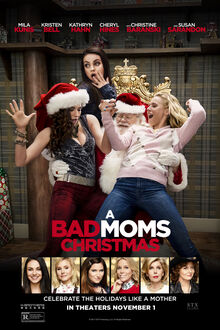 A Bad Moms Christmas is an American comedy film centered around the holiday of Christmas. The film is directed by Scott Moore, and Jon Lucas. It stars Mila Kunis, Kristen Bell, Kathryn Hahn, Cheryl Hines, Christine Baranski, and Susan Sarandon.

As their own mothers drop in unexpectedly, our three under-appreciated and over-burdened moms rebel against the challenges and expectations of the Super Bowl for mothers: Christmas.

Retrieved from "https://movies.fandom.com/wiki/A_Bad_Moms_Christmas?oldid=175016"
Community content is available under CC-BY-SA unless otherwise noted.