watch 01:38
The Loop (Movies)
Do you like this video?
A Better Life 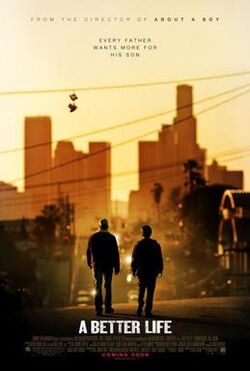 A Better Life is a 2011 drama by director Chris Weitz that earned lead actor Demián Bichir an Oscar nomination for his performance. The film tells the story of a Latino gardner working in East L.A. trying to keep his son away from gangs and immigration agents while struggling to give him the opportunities he never had.

Retrieved from "https://movies.fandom.com/wiki/A_Better_Life?oldid=119811"
Community content is available under CC-BY-SA unless otherwise noted.