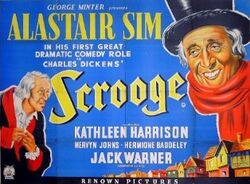 A Christmas Carol (U.S. title) or Scrooge is a 1951 British film adaptation of the Charles Dickens classic novel A Christmas Carol. It was directed by Brian Desmond Hurst. The screenplay was written by Noel Langley. It stars Alastair Sim as Ebenezer Scrooge.

An old bitter miser is given a chance for redemption on Christmas Eve when he is haunted by three ghosts. The spirits remind him of the past that has led him to be the cold-hearted man he is, show him the effect his harshness is having on others in the present, and reveal his possible future if he does not change his ways.

Retrieved from "https://movies.fandom.com/wiki/A_Christmas_Carol_(1951)?oldid=121756"
Community content is available under CC-BY-SA unless otherwise noted.