watch 00:59
The Loop (Movies)
Do you like this video?
A Civil Action 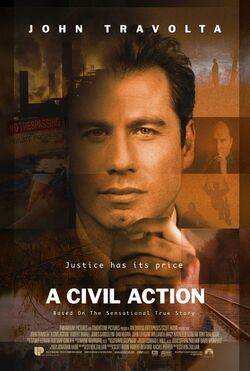 Environmental toxins in the city of Woburn, Massachusetts contaminate the area's water supply, and become linked to a number of deaths of local children. Cocky Boston attorney Jan Schlichtmann (John Travolta) and his small firm of personal injury lawyers are asked by Woburn resident Anne Anderson (Kathleen Quinlan) to take legal action against those responsible. After originally rejecting a seemingly unprofitable case, Jan finds a major environmental issue involving groundwater contamination that has great legal potential and realizes the local tanneries could be responsible for several deadly cases of leukemia. Jan decides to go forward against two giant corporations which own the tanneries – Beatrice Foods and W. R. Grace and Company – thinking that the case could possibly earn him millions and boost his firm's reputation.

Bringing a class action lawsuit in federal court, Jan represents families who demand an apology and a clean-up of contaminated areas. However, the case develops a life of its own and takes over the lives of Jan and his firm. The lawyers for Beatrice and Grace are not easy to intimidate, a judge (John Lithgow) makes a key ruling against the plaintiffs, and soon Jan and his partners find themselves in a position where their professional and financial survival has been staked on the outcome of the case. Jan stubbornly declines settlement offers, gradually coming to believe that the case is about more than just money. He allows his pride to take over, making outrageous demands and deciding that he must win at all costs. Pressures take their toll, with Jan and his partners going deeply into debt.

After a lengthy trial, the case is dismissed in favor of Beatrice, after Jan turned down an offer of $20 million from Beatrice attorney Jerry Facher (Robert Duvall) during jury deliberations. The plaintiffs are forced to accept a settlement with Grace that barely covers the expense involved in trying the case, leaving Jan and his partners broke. The families are deeply disappointed, and Jan's partners dissolve their partnership, effectively breaking up the firm. Jan ends up alone, living in a small apartment and running a small-time law practice. He manages to find the last key witness to the case, but lacks resources and courage to appeal the judgement. The files are archived while Jan later files for bankruptcy.

A postscript reveals that the EPA, building on Jan's work on the case, later brought its own enforcement action against Beatrice and Grace, forcing them to pay millions to clean up the land and the groundwater. It takes Jan several years to settle his debts, and he now practices environmental law in New Jersey.

Retrieved from "https://movies.fandom.com/wiki/A_Civil_Action?oldid=178540"
Community content is available under CC-BY-SA unless otherwise noted.