View src
watch 02:24
Wiki Targeted (Entertainment)
Do you like this video?
Play Sound
A Clockwork Orange 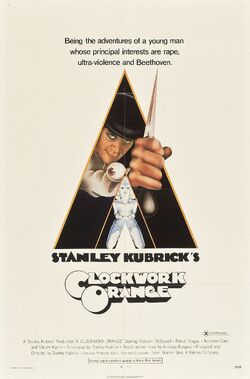 A Clockwork Orange is a 1971 film written, directed and produced by Stanley Kubrick, adapted from Anthony Burgess' 1962 novella of the same name. It features disturbing, violent images, facilitating its social commentary on psychiatry, youth gangs, and other social, political, and economic subjects in a dystopian, future Britain.

Alex (Malcolm McDowell), the main character, is a charismatic, sociopathic delinquent whose interests include classical music (especially Beethoven), rape, and what is termed "ultra-violence". He leads a small gang of thugs (Pete, Georgie, and Dim), whom he calls his droogs (from the Russian друг, "friend", "buddy"). The film chronicles the horrific crime spree of his gang, his capture, and attempted rehabilitation via controversial psychological conditioning. Alex narrates most of the film in Nadsat, a fractured adolescent slang comprising words from Slavic languages(especially Russian), English, and Cockney rhyming slang.

A Clockwork Orange features a soundtrack comprising mostly classical music selections and Moog synthesizer compositions by Wendy Carlos (then known as "Walter Carlos"). The artwork of the now-iconic poster of A Clockwork Orange was created by Philip Castle with the layout by designer Bill Gold.