View src
watch 02:24
Wiki Targeted (Entertainment)
Do you like this video?
Play Sound
A Dog's Purpose 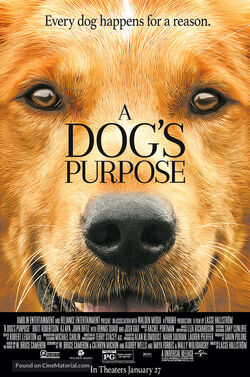 A devoted dog (Josh Gad) discovers the meaning of her own existence through the lives of the humans she teaches to laugh and love. Reincarnated as multiple canines over the course of five decades, the lovable pooch develops an unbreakable bond with a kindred spirit named Ethan (Bryce Gheisar). As the boy grows older and comes to a crossroad, the dog once again comes back into his life to remind him of his true self.

The film received mainly negative reviews by critics. On review aggregator website Rotten Tomatoes, the film has an approval rating of 33% based on 66 reviews, and an average rating of 4.8/10. The site's critical consensus reads, "A Dog's Purpose offers an awkward blend of sugary sentiment and canine suffering that tugs at animal-loving audiences' heartstrings with shameless abandon." On Metacritic, which assigns a normalized rating, the film has a score 43 out of 100, based on 28 critics, indicating "mixed or average reviews". On CinemaScore, audiences gave the film an average grade of "A" on an A+ to F scale.