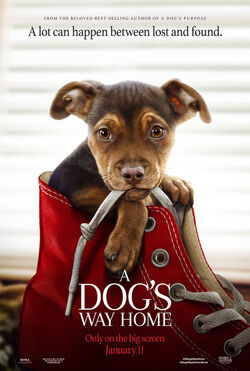 Charles Martin Smith was hired to direct the film in August 2017, and Judd and Olmos were cast in November 2017. The film takes place in Colorado.

A Dog's Way Home is scheduled for release on January 11, 2019, alongside The Upside and Ad Astra.

A dog embarks on a 400-mile journey home after it's separated from its owner, Lucas, who is an aspiring medical student.

The film is scheduled to be released on January 11, 2019 by Sony Pictures.

On October 12, 2018, Sony released a teaser trailer for the film, the same day when Bad Times at the El Royale, Goosebumps 2: Haunted Halloween and First Man were released in theaters.

A Dog's Way Home on IMDb

Retrieved from "https://movies.fandom.com/wiki/A_Dog%27s_Way_Home?oldid=175033"
Community content is available under CC-BY-SA unless otherwise noted.