Start a Wiki
watch 01:27
The Loop (Movies)
Do you like this video?
A Fistful of Fingers 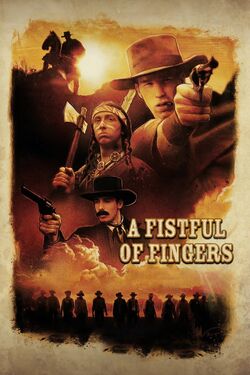 A Fistful of Fingers is a 1995 British film written and directed by Edgar Wright. It opened at the Prince Charles Cinema on 24 November 1995,[1] and debuted in the United States 20 years later at the Cinefamily in Los Angeles as a midnight movie.[2] The film was never commercially available on home video in either country, although Wright said in 2015 that he hoped to "finally release it [...] with a commentary and everything".[3]

It is a remake of an earlier, and even lower-budget, film of the same name by Wright and starring Graham Low which had been made while they were still at school. The original Fistful of Fingers was never picked up by a distributor, but did receive enough local attention—along with Wright's other school-era spoofs such as Carbolic Soap, The Unparkables, and Rolf Harris Saves the World—for Wright to win funding for the 1994 remake.

Retrieved from "https://movies.fandom.com/wiki/A_Fistful_of_Fingers?oldid=172000"
Community content is available under CC-BY-SA unless otherwise noted.