Start a Wiki
A Good Day to Die Hard 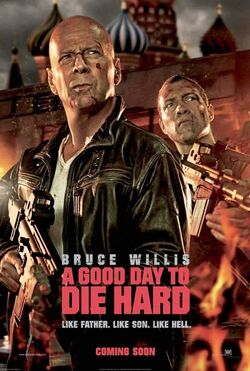 A Good Day to Die Hard is an American action films directed by John Moore and written by Skip Woods. It is the fifth installment of the Die Hard film series. It is set to be released on February 7, 2013, in Hong Kong and South Korea, and on February 14, 2013, in the United States.

John McClane, who for the first time finds himself on foreign soil after traveling to Moscow to help his wayward son Jack - unaware that Jack is really a highly-trained CIA operative out to stop a nuclear weapons heist. With the Russian underworld in pursuit, and battling a countdown to war, the two McClanes discover their opposing methods make them unstoppable heroes.

On May 5, 2010, it was announced that X-Men Origins: Wolverine and The A-Team writer Skip Woods was in negotiations to script a fifth Die Hard movie, and that the film will be produced by Alex Young. Bruce Willis will again return as John McClane, and Willis said that he would like to see Live Free or Die Hard director Len Wiseman return and even wishes to see the story take place outside of the United States, with a tentative title of Die Hard 24/7.

On October 5, 2010, during an MTV interview, Willis announced that a first draft of the script was finished and that shooting should begin in 2011. Regarding a possible Die Hard 6, Bruce Willis told ShowbizSpy, "for me, I want to do Die Hard 5, then one final Die Hard movie—Die Hard 6—before finally hanging that white vest up for good". Noam Murro was set to direct the film scripted by Woods and continue to develop the script, but he left to direct the 300 prequel, 300: Battle of Artemisia, instead. Irish-born director John Moore is now signed on to direct. The film is said to involve John McClane and his son heading to Russia.

On 13 October 2011, the studio announced exclusively on The Jim Rome Show that the film would be called A Good Day to Die Hard and would be released on Valentine's Day 2013. On the same day, sources at FOX Studio's indicated that Patrick Stewart was under strong consideration for the film's main villain, a disgraced Russian general who plots the assassination of the visiting U.S. President. The Studio was looking at Liam Hemsworth, Aaron Paul, James Badge Dale, and D.J. Cotrona for the part of John McClane Jr. in the film.

On February 22, 2012, it was announced that Jai Courtney would be portraying John "Jack" McClane, Jr. in the film.

On April 4, 2012, it was announced that Sebastian Koch and Yuliya Snigir would portray Russian villains.

Retrieved from "https://movies.fandom.com/wiki/A_Good_Day_to_Die_Hard?oldid=164035"
Community content is available under CC-BY-SA unless otherwise noted.