Start a Wiki
A Haunted House 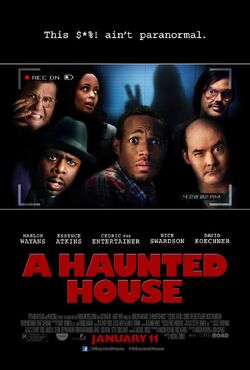 From the creators of "Scary Movie" comes another hilarious horror spoof, a parody of the "Paranormal Activity" franchise written and directed by Marlon Wayans.

When newlyweds Malcolm (Marlon Wayans) and Kisha (Essence Atkins) move into their dream house, they quickly find they’re not alone. But it’s not the house that’s haunted, but his wife that is possessed with spirits – or as Malcolm calls it – “relationship baggage.” Malcolm hires everyone from a priest to modern day ghost busters to rid her of the demon, determined not to let the evil spirit ruin his marriage... or his sex life for that matter.