Start a Wiki
watch 01:48
The Loop (Movies)
Do you like this video?
A Madea Christmas 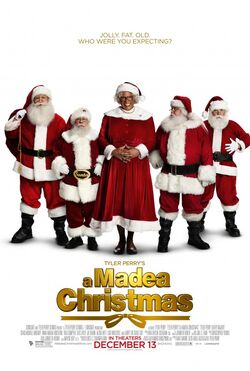 A Madea Christmas is a 2013 comedy in the Tyler Perry's Madea series of films adapted from his play of the same name. Written and directed by Tyler Perry, stars include Tyler Perry as Madea, Anna Maria Horsford, Larry the Cable Guy, Chad Michael Murray, and Kathy Najimy.

Madea dispenses her unique form of holiday spirit on rural town when she's coaxed into helping a friend pay her daughter a surprise visit in the country for Christmas.[1]

Retrieved from "https://movies.fandom.com/wiki/A_Madea_Christmas?oldid=76934"
Community content is available under CC-BY-SA unless otherwise noted.