watch 00:59
The Loop (Movies)
Do you like this video?
Tyler Perry's A Madea Family Funeral 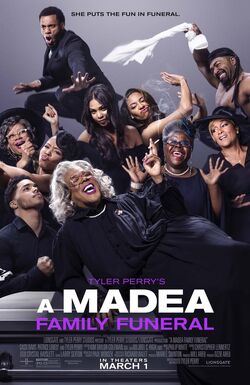 Tyler Perry's A Madea Family Funeral is a 2019 American comedy film directed by Tyler Perry. The cast of the film consists of Perry, Cassi Davis, and Patrice Lovely.

The film was released in the United States on March 1, 2019, by Lionsgate.

A joyous family reunion becomes a hilarious nightmare as Madea and the crew travel to backwoods Georgia, where they find themselves unexpectedly planning a funeral that might unveil unsavory family secrets.

Retrieved from "https://movies.fandom.com/wiki/A_Madea_Family_Funeral?oldid=156426"
Community content is available under CC-BY-SA unless otherwise noted.