A Night at the Roxbury

View src
watch 02:24
Wiki Targeted (Entertainment)
Do you like this video?
Play Sound
A Night at the Roxbury 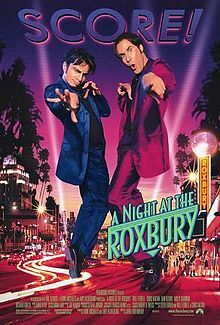 In the original sketches, Doug and Steve were often joined by that night's host, though this aspect of the sketch was not included in the film.

Other roles include Jennifer Coolidge as a police officer, Chazz Palminteri's uncredited role as gregarious night club impresario Mr. Benny Zadir, and Colin Quinn as his bodyguard. Ex-SNLer Mark McKinney has a cameo as a priest officiating a wedding.

Wealthy Yemeni-American brothers Steve (Will Ferrell) and Doug Butabi (Chris Kattan) enjoy frequenting nightclubs, where they bob their heads in unison to dance music (specifically Haddaway's hit song "What is Love") and fail miserably at picking up women. Their dream is to party at the famous L.A. nightclub The Roxbury, a fabled nightclub where they are continually denied entrance by a hulking bouncer (Michael ClarkeDuncan). By day, the brothers work at an artificial plant  store owned by their wealthy father, Kamehl Butabi (Dan Hedaya). hey spend most of their time goofing off, daydreaming about opening a club as cool as the Roxbury together, and Doug using credit card transactions as an excuse to hit on a phone approval operator. The store shares a wall with a lighting emporium owned by Fred Sanderson (Dwayne Hickman). Mr. Butabi and Mr. Sanderson hope that Steve and Emily (Molly Shannon), Sanderson's daughter, will marry, uniting the families and the businesses to form the first plant-lamp emporium.

After a day at the beach the brothers decide that tonight is the night they will finally get into the Roxbury. Returning home, Doug gets into a heated argument with their father about going out clubbing instead of staying home. Their father has planned a dinner party with Emily and her parents. The angered Mr. Butabi then denies them access to their BMW car and their cell phones. They are given enormous cell phones by their mother (Loni Anderson) and allowed use of the fake-plant store's delivery van, they are quickly rejected by the doorman (Michael Clarke Duncan). After discovering they might bribe their way into the club, the brothers drive around looking for an ATM. They get into a fender-bender with Richard Grieco (playing himself) and to avoid a lawsuit, Grieco uses his fame to get them into the popular club. There they meet the owner of the Roxbury, Benny Zadir (Chazz Palminteri), who listens to their idea for a nightclub of their own. He likes them and sets up a meeting with them for the next day. The brothers also meet a pair of women at the Roxbury: Vivica (Gigi Rice) and Cambi (Elisa Donovan), who see them talking to Zadir and think that the brothers are rich.

On the way to the afterparty at Mr. Zadir's house, the brothers annoy his driver and bodyguard Dooey (Colin Quinn) by making him stop to buy fluffy whip and making jokes about sleeping with his parents. As revenge, the next day Dooey denies them entry into Zadir's office for their meeting. He tells the brothers that Zadir was drunk out of his mind last night and does not know who they are. In reality, Zadir really wants to see them, but does not have their contact information. The girls break up with the Butabi brothers after realizing they are not really wealthy. The brothers fight and Doug moves out of their shared bedroom and into the guest house. Meanwhile Steve is forced into an engagement with Emily. The wedding is held in the backyard of the Butabi residence, but is interrupted by Doug. Having gone on a fluffy-whip-fueled bender, he interrupts the wedding, reconciles with his brother, and the wedding is called off. Afterwards, Richard Grieco (a guest at the wedding) talks to Mr. Butabi to help him understand that Steve was not ready for marriage, and that Butabi is too hard on Doug.

The movie ends as the Butabi brothers happen upon a hot new club. The building is unique in that the exterior is constructed to resemble the interior of a nightclub, and the interior resembles a street — this was an idea pitched by Doug and Steve to Zadir earlier in the movie. Attempting to enter, they are surprised to find their names on the VIP list. In addition, Zadir reveals that to reward their idea, he has made them part-owners of the club. Their new-found success comes full circle when they meet two women in the club: Doug's phone representative from the credit card company (Meredith Scott Lynn) and a police officer (Jennifer Coolidge) whom Steve earlier flirted with while getting a ticket.

The film was almost universally panned by critics, garnering an 11% rating on Rotten Tomatoes, with the consensus that A Night at the Roxbury "has the same problems as the worst SNL movies: one-note characters and plots unreasonably stretched to feature length runtime". Stephen Holden of The New York Times acknowledged the film's appeal, but reasoned that it was "a lot like the brothers themselves: undeniably pathetic but strangely lovable. Still, do you really want to spend an hour and a half with them in a dark room?" Roger Ebert observed that "the sad thing about A Night at the Roxburyis that the characters are in a one-joke movie, and they're the joke... It's the first comedy I've attended where you feel that to laugh would be cruel to the characters." The film has since found major popularity on home video and television since its release, and despite its cold reception remains one of the best known SNL films. This is partly due to being Will Ferrell's first movie in a leading role, and his later popularity as a major film comedian.