Start a Wiki
A Nightmare on Elm Street 5: The Dream Child 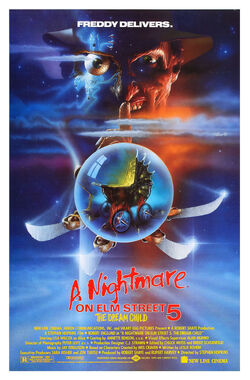 Taking place almost a year after The Dream Master, Alice and Dan have now started dating and there is no sign of Freddy Krueger. One day, while in the shower, she sees herself at a strange asylum. As she walks she finds that she is dressed in a nun's habit with a nametag saying Amanda Krueger. She is then attacked by patients at the hospital but wakes up before anything happens. The next day Alice is graduating from high school alongside her new friends consisting of Greta, an aspiring supermodel, Mark, a comic book geek, and Yvonne, a candy striper who is also a swimmer. She only confides her nightmare to Dan, after he tells her about a trip to Europe. He tells her she is all in control of her dreams, and she goes to work.

While on her way to work, Alice finds herself back at the asylum, where she witnesses Amanda giving birth. Amanda tries to collect the baby before it escapes but it gets out of the operating room and Alice follows it into the same church that she had defeated Freddy in the previous film. The baby quickly finds Freddy's remains and grows into an adult, fully resurrecting before Alice who hints that he's found the key to coming back. Amanda approaches to help stop Freddy's return, but Freddy closes the door on her. Alice emerges at the diner she works in, but four hours late. She phones Dan who immediately rushes to join her. En route though, Dan falls asleep and Freddy comes after him. After turning Dan into a very literal speed demon with a motorcycle, he causes him to run full speed into a tanker truck. Alice hears the crash and rushes out to see Dan's body, which then comes to life, causing Alice to faint. At the hospital, being treated for shock, Alice is informed that she is pregnant with Dan's child. She also meets a boy named Jacob who visits her in the night, but Yvonne tells her that there is no children's ward at the hospital, nor were there any children on her floor. She tells her friends about Freddy's legend, Yvonne is completely dismissive while the others, still skeptical say that whatever is after Alice will have to go through them first (which is what Alice is afraid of).

Greta falls asleep at a dinner party, and fully rants on her mother's obsessive and smothering behavior before Freddy arrives as a waiter and kills Greta by forcing her to eat herself, then choke to death in front of the real dinner party. Mark, who starts to believe the stories falls asleep and is lured into Freddy's house. But Alice draws herself into his dream and saves him before seeing Jacob again; she realizes that Jacob is her unborn baby but awakens before she can talk to him. She requests an early ultrasound and she learns that Freddy is feeding the spirits of her friends to her baby and using his dreams to kill them as well. The argument over Alice's sanity causes a rift between her and Yvonne, but Yvonne falls asleep at the pool and is attacked by Freddy. Alice goes to find Amanda in the asylum, but she is drawn off the search by Freddy holding Yvonne hostage. Meanwhile Mark, standing vigil over Alice falls asleep and finds a comic book depicting the movie's events up to that point. He realizes he's fallen asleep and is drawn into a nightmare. After a game of cat and mouse, Mark's love for Greta helps him unlock his dream power; the comic hero version of himself the Phantom Prowler, which he uses to attack Freddy. But Freddy turns the tables on Mark and slashes him to pieces by turning him into a paper doll version of himself and shredding him apart.

After saving Yvonne from Freddy and discovering Mark's fate, Alice pleads for Yvonne to find Amanda at the old asylum while she goes to sleep in search of Freddy and her son. After being slowed by an M.C. Escher type labyrinth, Alice eventually catches up to Freddy and Jacob and realizes that Freddy has been hiding inside of her since his original defeat. She draws him out, but the attack severely weakens her. Meanwhile, Yvonne finds Amanda's remains and frees her from her earthly prison. She appears and informs Jacob to use Freddy's own power against him and save Alice. He does so, causing the spirits of Dan, Mark and Greta to literally rip Freddy's baby form out of him. Jacob returns to his infant form and is absorbed into Alice, while Freddy is absorbed into Amanda. As she leaves, Freddy tries to break himself free of Amanda, but she closes the church doors on him, sealing him away for good.

Months later, Alice has given birth to Jacob, who she has named "Jacob Daniel" and is sleeping peacefully now. She meets with her father and Yvonne in the park for a play date. All appears to be back to normal, but as the scene pans out it focuses on a group of school children humming Freddy's familiar rhyme.

The film received negative reviews. Rotten Tomatoes reports a rating of 33% "Rotten" based on 30 reviews.

Retrieved from "https://movies.fandom.com/wiki/A_Nightmare_on_Elm_Street_5:_The_Dream_Child?oldid=200809"
Community content is available under CC-BY-SA unless otherwise noted.