Start a Wiki
watch 01:21
The Loop (Movies)
Do you like this video?
A Quiet Place 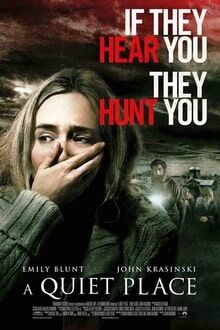 A Quiet Place is an American horror film directed by John Krasinski. The cast of the film consists of Krasinski, and Emily Blunt.

Over three months in 2020, most of Earth's human population has been wiped out by sightless creatures. Boasting considerable size, speed and a seemingly impenetrable armored shell, they use their auditory acuity to locate and attack anything that makes noise. The Abbott family — husband Lee, wife Evelyn, sons Marcus and Beau, and deaf daughter Regan — silently scavenge for supplies while communicating silently through American Sign Language. Lee takes a toy space shuttle from Beau, warning him that its noise could attract the creatures. Regan returns the toy to Beau, who activates it when the family is near a bridge. Its noise causes a creature to appear, killing him.

A year later, the family survive on their farm. Regan still struggles with guilt over her brother's death and Evelyn is in the final stages of pregnancy. Lee attempts to repair Regan's cochlear implant but the device fails to restore her hearing. Later, Lee takes Marcus to a nearby river to teach him to fish while Regan visits Beau's grave. Lee explains to Marcus that they will always be safe from the creatures so long as louder sounds mask their audible movements. On their way back home, they encounter a homeless old man whose wife has been killed by the creatures and he commits suicide by screaming as Lee and Marcus run and hide behind a tree while the man is killed by a creature. Alone at the house, Evelyn goes into labor. While making her way to their specially modified soundproof basement, she steps on a large nail. In agony, she accidentally drops a glass picture frame and alerts a nearby creature. Evelyn flips a switch that changes the exterior house lights to red as a danger signal to the others, and struggles to remain silent during her contractions.

Arriving at the farm and seeing the lights, Lee instructs Marcus to set off fireworks as a diversion. He finds Evelyn hiding in the bathroom with their newborn son. The baby starts crying, attracting a creature, and they narrowly avoid another attack on the way to the basement. Lee leaves to find the other children, after promising Evelyn he will protect them. Evelyn falls asleep but wakes to discover that the basement is flooded with water from a broken pipe and that a creature is stalking her.

Regan hurries back to the farm. She and Marcus take refuge atop a grain silo, lighting a fire to alert their father to their whereabouts. A hatch door gives way and Marcus falls into the silo. He sinks into the corn and nearly suffocates, but Regan jumps in and saves him. They avoid further danger by clinging to the fallen silo door and survive a subsequent creature attack by hiding under it. Regan's repaired cochlear implant reacts to the proximity of the creature by emitting a piercingly-loud high-frequency sound that drives the creature away. The children escape from the silo and reunite with Lee.

The creature returns and Lee attacks it with a pulaski, while Marcus and Regan hide in a pickup truck. Lee is wounded and Marcus shouts, attracting the creature to the truck. Lee uses sign language to tell Regan that he loves her before sacrificing himself to draw the creature away from his children. Regan and Marcus roll the truck down a hill to escape and reunite with Evelyn and the baby at the farmhouse.

Regan, not having been allowed in the basement previously, sees her father's notes on the creatures and on his experimentation with several different implants. When the creature returns to invade the basement, Regan places the boosted implant on a nearby microphone, magnifying the feedback to ward off the creature. Painfully disoriented, the creature exposes the flesh beneath its armored head, rendering itself vulnerable to a shotgun blast from Evelyn. Security monitors show two other creatures approaching. With their newly acquired knowledge of the creatures' weakness, Evelyn and Regan prepare to fight back. 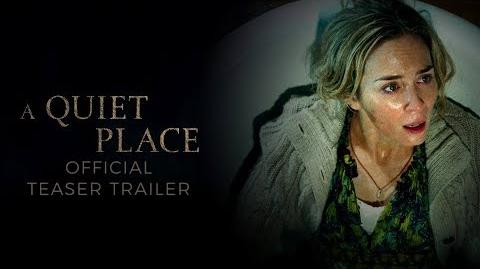 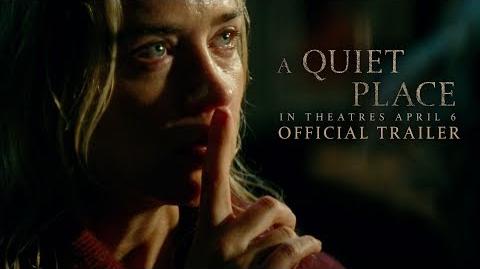 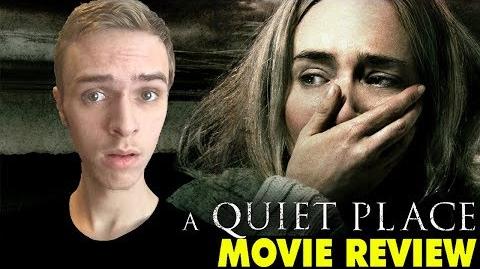 A Quiet Place - Movie Review
Caillou Pettis reviews A Quiet Place.
Add a photo to this gallery
Retrieved from "https://movies.fandom.com/wiki/A_Quiet_Place?oldid=229329"
Community content is available under CC-BY-SA unless otherwise noted.