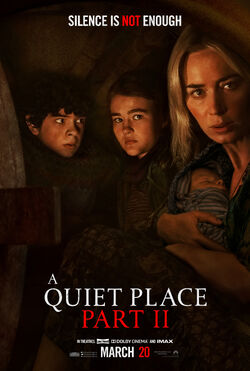 A Quiet Place Part II is a 2021 American horror film that is the sequel to A Quiet Place (2018). The sequel film, written and directed by John Krasinski, stars Emily Blunt, Millicent Simmonds, Noah Jupe reprising their roles from the first film, while newcomers Cillian Murphy, and Djimon Hounsou stars in supporting roles.

Talks for a sequel began in April 2018, with Bryan Woods and Scott Beck had previously stated that they had begun thinking of ideas and set pieces for a possible second film. By August 2018, Paramount Pictures announced the project with Krasinski returning to write the script, while Platinum Dunes producers Michael Bay, Andrew Form and Brad Fuller returning as producers, and Blunt, Simmonds and Jupe set to reprise their roles. Production took place in Upstate New York from June 2019 to September 2019. The film was released on May 28, 2021.

Following the deadly events at home, the Abbott family must now face the terrors of the outside world as they continue their fight for survival in silence. Forced to venture into the unknown, they quickly realize that the creatures that hunt by sound are not the only threats that lurk beyond the sand path.

Retrieved from "https://movies.fandom.com/wiki/A_Quiet_Place_Part_II?oldid=317343"
Community content is available under CC-BY-SA unless otherwise noted.