watch 01:20
The Loop (Movies)
Do you like this video?
A Royal Affair 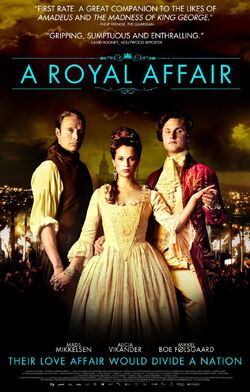 A Royal Affair (Danish: En kongelig affære) is a 2012 historical drama film directed by Nikolaj Arcel, starring Mads Mikkelsen, [Alicia Vikander]] and Mikkel Følsgaard. The story is set in the 18th century, at the court of the mentally ill King Christian VII of Denmark, and focuses on the romance between the queen and the royal physician Struensee.

The film competed in competition at the 62nd Berlin International Film Festival and has been selected as the Danish entry for the Best Foreign Language Oscar at the 85th Academy Awards. At the Berlin Film Fesitval, Mikkel Følsgaard won the Silver Bear for Best Actor and Nikolaj Arcel and Rasmus Heisterberg won the award for Best Script.

A young queen, who is married to an insane king in the 18th century, falls secretly in love with her physician - and together they start a revolution that changes a nation forever.

Nikolaj Arcel and Rasmus Heisterberg started the writing process by reading the 1999 novel The Visit of the Royal Physician by Per Olov Enquist, which is based on the events surrounding Johann Friedrich Struensee's time at the Danish court. The exclusive film rights for the novel were already sold to a company which had been struggling for over a decade to make a large-scale adaptation in English, and did not want to sell the rights to Zentropa. Research continued and the film was eventually credited as based on Bodil Steensen-Leth's erotic novel Prinsesse af blodet, which tells the story from the perspective of the queen, Caroline Mathilde. The film's perspective and characterisation did still remain highly influenced by Enquist's version, in particular in the portrayal of Struensee as an idealistic promoter of freedom of speech, the romantic view of the royal court as an ironical charade and the role of the queen as a revolutionary partner-in-crime to Struensee. To avoid conflicts about rights, Enquist was contacted to clarify some instances of what he had made up and what was based on documented events, and a person was employed specifically to compare the screenplay and the novel to guarantee that they were dissimilar enough.

The film was produced by Zentropa and is a co-production among Denmark, Sweden and the Czech Republic. It had a budget of 46 million Danish kroner. Before settling on the final title, the film had the production titles Dronningen og livlægen ("The queen and the royal physician") and Caroline Mathildes år ("Caroline Mathilde's years").

Retrieved from "https://movies.fandom.com/wiki/A_Royal_Affair?oldid=74484"
Community content is available under CC-BY-SA unless otherwise noted.