watch 00:59
The Loop (Movies)
Do you like this video?
A Simple Favor 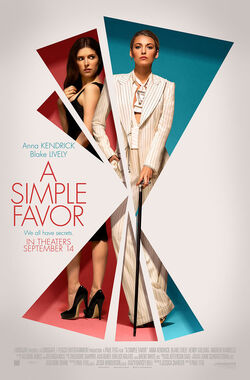 Stephanie Smothers (Anna Kendrick) is a widowed single mother who runs a vlog with crafts and recipes. Emily Nelson (Blake Lively) is a PR director for a fashion company and whose son Nicky attends the same elementary school as Stephanie's son Miles. Emily and Stephanie become best friends, arranging play dates for the boys. Over martinis, they exchange confessions, where Stephanie admits that as a teenager, she had sex with her half-brother Chris. Emily expresses her frustration at the lack of success of her husband, English professor Sean Townsend (Henry Golding), and their poor financial situation.

Emily has a work crisis and asks Stephanie to babysit Nicky while Sean is in London attending to his injured mother. After two days of Emily not returning her calls, Stephanie calls Emily's employer, Dennis Nylon, and they tell her she is in Miami. Stephanie calls Sean who calls the police. Emily had told both Stephanie and Sean that she hates having her picture taken, leading Stephanie to sneak into Emily's work and find a photo, which she uses to create missing person posters.

Detective Summerville reports that Emily lied about flying to Miami and that she rented a car. A fan of Stephanie's vlog reports seeing Emily in Michigan and the car is discovered near a summer camp, where police find her drowned body in the lake. Stephanie and Sean develop a bond through grief and taking care of the boys, which turns into a relationship and Stephanie moves in with him. Detective Summerville later reveals to Stephanie that Emily had severe liver damage, a large amount of heroin in her system and that Sean had recently taken out a $4 million life insurance policy on Emily.

Emily, alive and in hiding, sends Stephanie an insulting message about her tryst with Chris, causing Stephanie to recall how her husband, Davis, suspected her relationship with her half-brother and questioned the paternity of Miles. He confronted Chris during a car ride, which resulted in a crash that killed them both.

Stephanie investigates Emily's past, speaking to Diana Hyland, an artist who painted a portrait of Emily. Diana says the girl in the painting is Claudia, her muse, and describes her as a con artist who disappeared. Stephanie asks about Michigan, and Diana gives Stephanie information that leads Stephanie to a yearbook showing that Emily is actually Hope McLanden and that she has an identical twin named Faith McLanden. Stephanie meets with the twins' mother, Margaret, who explains that when they were 16 years old, the twins set fire to a wing of the house. Meanwhile, Emily surprises Sean at a cafe and tells him about her plan to collect the insurance money to resolve their financial issues.

Stephanie lures Emily into meeting her through cryptic messages on her vlog. Emily explains that she is Hope and that the twins set the fire to kill their abusive father. The two fled and planned to rejoin later, but Faith never appeared. Emily worked hard building a career and a family when, 16 years later, Faith contacted her. Heroin-addicted Faith attempted to blackmail her for a million dollars, threatening to confess about the arson, so Emily drowned Faith in the lake. Emily lies and tells Stephanie that Sean planned the insurance scam.

Emily is angered by Sean's love for Stephanie, while Stephanie is angered by Sean's eagerness to rejoin Emily. Stephanie agrees to help Emily reappear to the public and frame Sean. Sean is arrested and released on bail. Stephanie has a change of heart and stages a fake argument with Sean in front of Emily to incriminate her, while police-planted microphones are recording. Emily predicts their ruse and has disabled the microphones. Emily confesses to the crimes, and holds the pair at gunpoint, telling them she will kill them and stage a murder-suicide. She shoots Sean in the shoulder and turns the gun on Stephanie, who reveals that she has a hidden camera live-streaming the entire event on her vlog. Emily is arrested after being struck by a car.

Closing text explains that Emily was sentenced to 20 years in prison, Sean's second novel became a New York Times bestseller and he became a successful professor at Berkeley, Stephanie's vlog has one million followers and is being turned into a morning show, and that she has also become a part-time private detective.

In post credits, Emily is seen to be in prison and winning a basketball game.

Retrieved from "https://movies.fandom.com/wiki/A_Simple_Favor?oldid=175526"
Community content is available under CC-BY-SA unless otherwise noted.