watch 00:59
The Loop (Movies)
Do you like this video?
Abbott and Costell Go to Mars 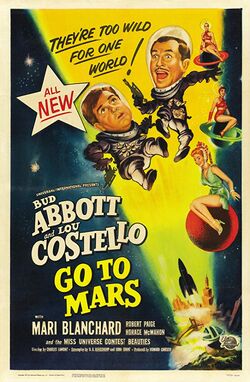 Abbott and Costello Go to Mars is a 1953 American science fiction comedy film from Universal-International, produced by Howard Christie, directed by Charles Lamont, that stars the comedy team of Abbott and Costello.

The film's storyline concerns the misadventures of Lester and Orville who accidentally find themselves aboard a rocketship bound for Mars, or so they think. Instead, they wind up landing at the New Orleans Mardi Gras thinking they have landed on the Red Planet. The pair are forced by bank robbers Mugsy and Harry to fly to the planet Venus, where they encounter a civilization consisting entirely of beautiful women. Despite the film's title, no character in the film travels to the planet Mars.

Orville (Lou Costello) is the oldest orphan at the Hideaway Orphans Home. He accidentally winds up inside a truck heading to a top-secret laboratory, where he is placed under the guidance of lab worker Lester (Bud Abbott) to help load supplies onto a rocketship. While on board with Lester, Orville hits the ignition button and the rocketship blasts off, flying across the country to New Orleans, where Mardi Gras is in progress. They exit and witness "hideous creatures", which are actually costumed celebrants, and conclude that they have successfully landed on Mars.

Meanwhile, two escaped convicts, Harry the Horse (Jack Kruschen) and Mugsy (Horace McMahon), enter the rocketship, put on the available spacesuits, and head to New Orleans to rob a bank. Lester and Orville, also clad in spacesuits, are wrongly accused of the crime and rush back to the rocketship, where Mugsy and Harry force them to launch into outer space.

After landing on Venus, the four men are quickly captured by female guards and brought to Queen Allura (Mari Blanchard), who informs him that Venus is only inhabited by women, as men were banished a long time ago. She takes more than a liking to Orville, however, and decides that he can stay if he promises to be true to her. He agrees and has Harry and Mugsy imprisoned for their crimes. Mugsy then convinces one of the female guards to flirt with Orville to prove to Queen Allura that he cannot be trusted. Orville "takes the bait" and the Queen orders all the men to leave Venus.

Upon returning to the Earth, they are lauded as heroes, and Allura, who is watching the celebration from Venus, sends a spaceship to Earth that drops a cake on Orville's head.

Shortly after the film's release, Abbott and Costello appeared on The Colgate Comedy Hour and did a comedy sketch in which they attended the film's premiere.

The Venusian cars featured in the film were later used in the science fiction feature This Island Earth (1955).

The Venusian women were played by contestants in the Miss Universe competition. Anita Ekberg, the winner of the Miss Sweden competition, was among the ensemble.

Science fiction author Robert A. Heinlein wrote a film treatment in 1950 called Abbott and Costello Move to the Moon that may have inspired the film's screenplay.

Abbot and Costello Go to Mars features a nine-year-old Harry Shearer, who later went on to star in This Is Spinal Tap and on the animated Fox comedy series The Simpsons.

In April 2018, the film was shown on MeTV’s “Svengoolie” program in Chicago. Series host Rich Koz as Svengoolie took humorous swipes at the film as well as giving some background info on the supporting cast.

Stan Laurel played by Steve Coogan looks ruefully at a billboard for the film in the 2018 film Stan & Ollie.

Retrieved from "https://movies.fandom.com/wiki/Abbott_and_Costello_Go_to_Mars?oldid=150806"
Community content is available under CC-BY-SA unless otherwise noted.