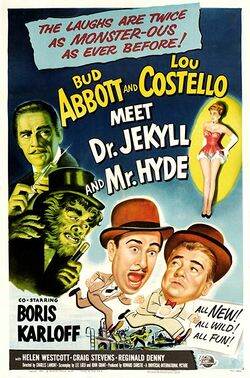 Inspired by the 1886 novella The Strange Case of Dr. Jekyll and Mr. Hyde by Robert Louis Stevenson, the film follows the story of two American detectives visiting Edwardian London who become involved with the hunt for Dr. Jekyll, who is responsible for a series of murders.

A rash of murders (by an unknown "monster") is plaguing London, and police are baffled. A newspaper reporter, Bruce Adams (Craig Stevens), finds one of the murder victims while coming home from a bar at night and calls the police. The next day, two American policemen, Slim (Bud Abbott) and Tubby (Lou Costello), who are working for the London Police Force, respond to a mob fight at a Women's Suffrage Rally in Hyde Park. Reporter Adams, young suffragette Vicky Edwards (Helen Westcott), Slim, and Tubby, all get caught up in the fray and wind up in jail. Later, Vicky's guardian, Dr. Henry Jekyll (Boris Karloff), bails Vicky and Adams out. Tubby and Slim are thereafter kicked off the police force. Unknown to anyone, however, Dr. Jekyll has developed an injectable serum which transforms him into Mr. Hyde (the "monster" responsible for the recent murders). When Jekyll notices Vicky's and Bruce's mutual attraction, he has more thoughts of murder, injects himself, and transforms once again into Hyde (with the intent of murdering Adams).

Meanwhile, Tubby and Slim decide that in order to get back on the police force they must capture this "monster" (Hyde). While walking down the street that night, Tubby spots Hyde (whom Slim at first mistakes for a burglar). They decide to follow Hyde into a music hall (where Vicky is performing and Adams is visiting her. Tubby annoys an actor in a far-eastern demon mask by mistaking him for the monster, and gets called "barmy" ). A chase ensues, and Tubby traps Hyde in a wax museum. However, by the time he brings the Inspector (Reginald Denny), Adams, and Slim to the scene, the monster has already reverted to Dr. Jekyll and Tubby is once again scolded by the Police Inspector. The "good" doctor, however, asks Slim and Tubby to escort him to his home. Once at Jekyll's home, Tubby goes off exploring and winds up drinking a potion which transforms him into a large mouse. Afterward, Slim and Tubby try to bring news of Jekyll's activities to the Inspector, but the Inspector refuses to believe them.

Later, when Vicky announces to Jekyll her intent to marry Adams, Jekyll (who is secretly in love with Vicky) does not share her enthusiasm and transforms into Hyde right in front of her. Bent, this time, on murdering Vicky, Hyde attempts to attack her. However, in the nick of time, Bruce, Slim, and Tubby save her and Hyde escapes. During the struggle, though, Jekyll's serum needle is dropped into a couch cushion, which Tubby accidentally falls onto, transforming him also into a Hyde-like monster. Another mad-cap chase ensues, this time with Bruce chasing Jekyll's monster and Slim pursuing Tubby's monster (both believing they are after Jekyll).The police are frustrated and confused by the monster's seemingly impossible running all over London.

Bruce's chase ends up back at Jekyll's home, where Hyde falls from an upstairs window to his death, revealing to everyone his true identity when he reverts to normal form. Slim then brings Tubby (still in monster form) to the Inspector. Tubby then bites the Inspector (and four officers) and reverts to himself, much to the chagrin of Slim. However, before Slim and Tubby can be once again derided by the Inspector, the Inspector and his men have each transformed into monsters themselves (probably from Tubby's bite) and chase Slim and Tubby out of the office.

Abbott and Costello Meet Dr. Jekyll and Mr. Hyde was filmed between January 26 and February 20, 1953 and received an "X" rating in Britain because of the scenes with Mr. Hyde. Furthermore, Boris Karloff (contrary to the credits) only actually played Dr. Jekyll and did not play Hyde. Once the transformation sequences were over, Hyde was, instead, played by stuntman Eddie Parker, who remained uncredited.

The film received a 6.4 film rating on IMDb based on 2,343 user Reviews. Many reviewers complained that, in this version, there was no struggle in the transformation between Dr. Jekyll and Mr. Hyde, giving the impression that (unlike the usual take on the story) Dr. Jekyll himself was evil and enjoyed the acts of Mr. Hyde. Other reviews complained of the lack of a strong script; calling the production cheap. Rotten Tomatoes has given the film a 6/10 score and the movie stands at an overall rating of 63. It also received an audience rating of 3.4 out of 5 (based on 3,553 user ratings). One critic, Steve Crum of the Kansas City Kansan, gave the film 3/5, saying, "Bud and Lou meet another monster for infrequent laughs."

Retrieved from "https://movies.fandom.com/wiki/Abbott_and_Costello_Meet_Dr._Jekyll_and_Mr._Hyde?oldid=152980"
Community content is available under CC-BY-SA unless otherwise noted.