watch 00:59
The Loop (Movies)
Do you like this video?
Abbott and Costello Meet the Invisible Man 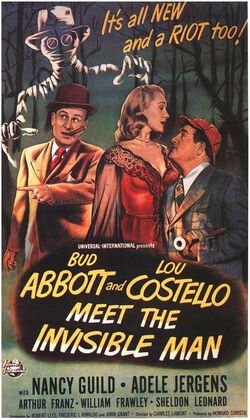 The film depicts the misadventures of Lou Francis and Bud Alexander, two private detectives investigating the murder of a boxing promoter. The film was part of a series in which the duo meet classic characters from Universal's stable, including Frankenstein, the Mummy and the Keystone Kops.

Lou Francis (Lou Costello) and Bud Alexander (Bud Abbott) have just graduated from a private detective school. Tommy Nelson (Arthur Franz), a middleweight boxer, comes to them with their first case. Tommy recently escaped from jail after being accused of murdering his manager, and asks the duo to accompany him on a visit to his fiancée, Helen Gray (Nancy Guild). He wants her uncle, Dr. Philip Gray (Gavin Muir), to inject him with a special serum he has developed which will render Tommy invisible, and hopes to use the newfound invisibility to investigate his manager's murder and prove his innocence. Dr. Gray adamantly refuses, arguing that the serum is still unstable, recalling that the formula's discoverer, John Griffin, was driven insane by the formula and did not become visible again until after he was killed. However, as the police arrive Tommy injects himself with it and successfully becomes invisible. Detective Roberts (William Frawley) questions Dr. Gray and Helen while Bud and Lou search for Tommy.

Helen and Tommy convince Bud and Lou to help them seek the real killer, after Tommy explains that the motive for the murder occurred after he refused to "throw" a fight, knocking his opponent, Rocky Hanlon (John Day), out cold. Morgan (Sheldon Leonard), the promoter who fixed the fight, ordered Tommy's manager beaten to death while framing Tommy for the crime. In order to investigate undercover, Lou poses as a boxer, with Bud as his manager. They go to Stillwell's gym, where Lou gets in the ring with Rocky. Tommy, still invisible, gets into the ring with them and again knocks out Hanlon, making it look like Lou did it, and an official match is arranged. Morgan urges Lou to throw the fight, but when the match occurs (with the aid of an invisible Tommy), poor Hanlon is knocked out yet again. Morgan plans Bud's murder, which is thwarted by Tommy, who is wounded in the battle and begins to bleed badly. The protagonists rush to the hospital where a blood transfusion is arranged between Lou and Tommy. During the transfusion Tommy becomes visible again – some of Tommy's blood has apparently entered Lou, who briefly turns invisible, only to reappear with his legs inexplicably on backwards.

When asked by a reporter whom he has fought in the past, Lou answers, "Chuck Lamont, Bud Grant." The film's director and screenwriter, respectively, are Charles Lamont and John Grant.

This film has been released several times on DVD. First on The Best of Abbott and Costello Volume Three, on August 3, 2004, and again on October 28, 2008 as part of Abbott and Costello: The Complete Universal Pictures Collection. Later, the film was included in the 3-disc The Invisible Man: The Complete Legacy Collection and the 21-disc Universal Classic Monsters: Complete 30-Film Collection both released on September 2, 2014. It was released on Blu-ray on August 28, 2018.

Retrieved from "https://movies.fandom.com/wiki/Abbott_and_Costello_Meet_the_Invisible_Man?oldid=144505"
Community content is available under CC-BY-SA unless otherwise noted.