Start a Wiki
watch 01:32
The Loop (Movies)
Do you like this video?
Abbott and Costello Meet the Killer, Boris Karloff 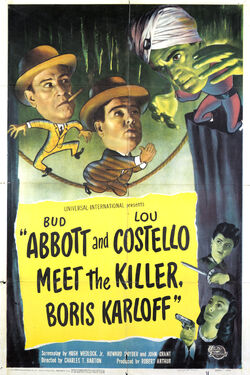 In 1956 the film was re-released along with Abbott and Costello Meet Frankenstein.

Prominent criminal attorney Amos Strickland (Nicholas Joy) checks into the Lost Caverns Resort Hotel. His murdered body is later discovered by the bellboy, Freddie Phillips (Lou Costello), who is implicated in the crime. Casey Edwards (Bud Abbott), the house detective, tries to clear Freddie, but Inspector Wellman (James Flavin) and Sgt. Stone (Mikel Conrad) keep him in custody at his hotel room 'on the state'.

Strickland's secretary Gregory Millford and seven of Strickland's former clients happen to be at the resort, and they are all suspects. These former clients are Swami Talpur (Boris Karloff), Angela Gordon (Lenore Aubert), Mrs. Hargreave (Victoria Horne), T. Hanley Brooks (Roland Winters), Lawrence Crandall (Harry Hayden), Mrs. Grimsby (Claire DuBrey) and Mike Relia (Vincent Renno). The bodies of Relia and the secretary Gregory Millford are found in Freddie's closet, and he and Casey try to move them and hide them. The former clients gather for a meeting and decide that they must conceal their pasts and that Freddie must take the blame for the three murders. They trick Freddie into signing a confession, and then want him dead. Angela tries to seduce him, but the police stop her when they fear she's poisoned the champagne, then the Swami attempts to hypnotize him into committing suicide but his stupidity saves him.

Freddie and the two police officers, in an attempt to draw out the real killer, inform everyone that Freddie is in possession of a blood-stained handkerchief found at the murder scene. Soon afterwards, several attempts to kill Freddie are made, including gunshots at the window of his booby-trapped room, and locking him in a steam cabinet. Eventually Freddie hears a voice that calls him to bring the handkerchief to the Lost Cavern. There he meets up with a masked figure who offers to save him from the hole he has just fallen into in exchange for the handkerchief. Freddie makes the mistake of telling the mysterious figure that he left it in his room. He is left in the hole, but is eventually rescued by the two police officers.

Back at the hotel, everyone has gathered together and Sgt. Stone returns with some muddy shoes that belong to Melton (Alan Mowbray), the hotel manager, which proves that he was the one in the caverns with Freddie. His motive for the murder was that he, Relia and Millford, Strickland's secretary, were blackmailing the owner, Mr. Crandell. What the blackmail was for is never explained. When Strickland found out he came to investigate, so Melton killed him. Millford then sent down the former clients to use as decoys for the police, but Melton killed Relia and Millford to cover it all up. He attempts to escape through a window, but is caught by a booby trap previously set by Freddie.

The original script, titled Easy Does It, was written with actor-comedian Bob Hope in mind. However, Universal then purchased the rights and reworked it for Abbott and Costello.

The role eventually played by Boris Karloff in the film was originally a female character named Madame Switzer in the final shooting script which was then titled, Abbott and Costello Meet the Killers. Five days before shooting, Karloff was hired and the character was changed to a swami.

After filming was completed, Costello was bedridden for several months due to a relapse of rheumatic fever, which he originally battled in 1943. As a result, the duo would not make another film together until one year later, 1950's Abbott and Costello in the Foreign Legion.

Boris Karloff's inclusion in the title of the film seems evident from the movie poster, which includes a comma between the words "Killer" and "Boris Karloff," but the actual credits in the film show no such distinction, and could be interpreted as "Abbott and Costello Meet the Killer," followed by the co-star credit "Boris Karloff."

In Australia and New Zealand, every scene with a corpse was removed prior to distribution. The film was banned in Denmark due to the scene where corpses play cards.

Abbott and Costello Meet the Killer, Boris Karloff on IMDb

Retrieved from "https://movies.fandom.com/wiki/Abbott_and_Costello_Meet_the_Killer,_Boris_Karloff?oldid=144497"
Community content is available under CC-BY-SA unless otherwise noted.