watch 00:59
The Loop (Movies)
Do you like this video?
Abbott and Costello in the Foreign Legion 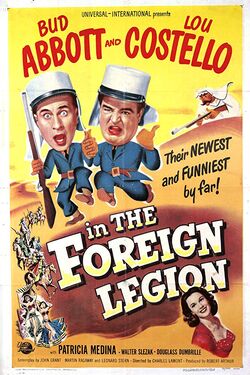 Bud Jones (Bud Abbott) and Lou Hotchkiss (Lou Costello) are wrestling promoters. Their star, Abdullah (Wee Willie Davis), no longer wishes to follow the script for their crooked matches, especially since he is supposed to lose his next match. Abdullah leaves America to return to his homeland, Algeria. The promoters' financiers, a syndicate that has lent them $5,000 to bring Abdullah to the States, are now requiring them to return the money or face the consequences. The two men follow Abdullah to Algeria in hopes of bringing him back.

Meanwhile, Abdullah's cousin, Sheik Hamud El Khalid (Douglass Dumbrille) and a crooked Foreign Legionnaire, Sgt. Axmann (Walter Slezak), have been raiding a railroad construction site in order to extort "protection" money from the railroad company. When Bud and Lou arrive they are mistaken for company spies, and the Sheik and Axmann attempt to murder them. As each attempt fails, the assassins' hatred for Bud and Lou intensifies, especially when Lou outbids the Sheik for six slave girls, one of whom, Nicole (Patricia Medina), is actually a French spy assigned to gain entry into the Sheik's camp. The boys are then chased, only to wind up hiding at the Foreign Legion headquarters, where Axmann tricks them to join.

Meanwhile, the Foreign Legion Commandant (Fred Nurney) suspects that there is a traitor among the Legionnaires, as the Sheik anticipates every one of the Legion's moves (secretly through Axmann). The Commandant then grants Bud and Lou a pass into town where they discovers Axmann's alliance with the arabs before meeting Nicole. She informs them that they must search Axmann's room for proof that he is a traitor, but he catches them in the act. However, they are spared, only to end up at a Legionnaire desert camp. At night, just before the camp is ambushed by the Sheik's men, Bud and Lou wander off in search of a camel that ran off and escape death. They are eventually captured, along with Nicole, who is put in Sheik Hamud's harem. The Sheik orders that one of his wrestlers execute them. The wrestler turns out to be Abdullah, who helps them escape so he can escape from being married to an unattractive woman. They head to Fort Apar, where they lure the Sheik's men inside and then blow it up. They are given awards by the Commandant and honorably discharged from the Legion. Lou thanks Nicole for helping them and gives his award to her before they leave, only for Bud to find out that Lou is taking the six slave girls with them back to the States.

Originally scheduled to begin shooting in December 1949, filming was postponed when Costello had to undergo an operation for a gangrenous gall bladder in November 1949. Filming eventually began on April 28, 1950, and ended on May 29, 1950. Despite having a stunt double, Costello did his own wrestling in the film, only to be rewarded with a wrenched arm socket and a stretched tendon.

In 1948, Abbott and Costello fired their agent, Eddie Sherman. Just before the filming of this picture, they reconciled with Sherman and rehired him.

David Gorcey, a member of the comedy team The Bowery Boys, has a cameo appearance in the film. The voice of the skeleton in the film was provided by Candy Candido, who briefly became Abbott's partner in the 1960s after Costello had died.

Some music from Abbott and Costello Meet Frankenstein was recycled for this film.

Retrieved from "https://movies.fandom.com/wiki/Abbott_and_Costello_in_the_Foreign_Legion?oldid=150804"
Community content is available under CC-BY-SA unless otherwise noted.