watch 00:59
The Loop (Movies)
Do you like this video?
About Time 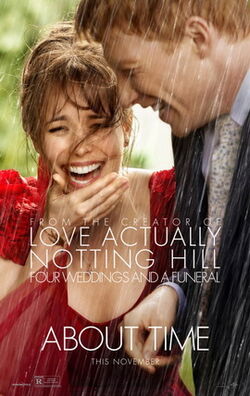 About Time is a 2013 British romantic comedy science fiction film revolving around the classic time travel theme of changing one's past in order to have a better future. Written and directed by Richard Curtis, the film stars Domhnall Gleeson, Rachel McAdams and Bill Nighy.

At the age of 21, Tim discovers he can travel in time and change what happens and has happened in his own life. His decision to make his world a better place by getting a girlfriend turns out not to be as easy as you might think. [1]

Retrieved from "https://movies.fandom.com/wiki/About_Time?oldid=179535"
Community content is available under CC-BY-SA unless otherwise noted.