Start a Wiki
watch 01:32
The Loop (Movies)
Do you like this video?
Abraham Lincoln: Vampire Hunter 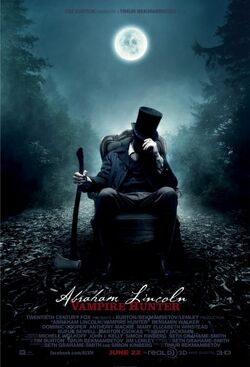 Abraham Lincoln: Vampire Hunter is a film based on the Seth Grahame-Smith novel of the same name. The release date is June 22nd, 2012.

While the title might seem bizarre, Abraham Lincoln: Vampire Hunter shows our 16th president in an entirely new light: as the country's first superhero, shaping our nation in the way we never knew about before. Produced by Tim Burton and directed by Timur Bekmambetov. The film presents Abraham Lincoln as both ordinary and extraordinary--everyone he loves has died, including his mother Nancy who was slain by a vampire, and he has no prestigious title. He not only becomes president of the United States but serves the greater good in more ways than one--he kills the undead. The story follows forty-five years of Lincoln's life, from 1820 to 1865.

Retrieved from "https://movies.fandom.com/wiki/Abraham_Lincoln:_Vampire_Hunter?oldid=178928"
Community content is available under CC-BY-SA unless otherwise noted.