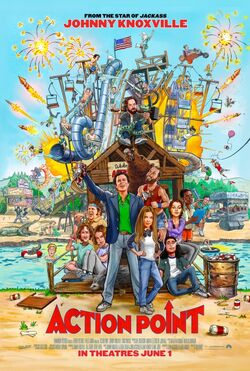 Action Point is a 2018 American comedy film directed by Tim Kirkby. The cast of the film consists of Johnny Knoxville and Chris Pontius.

Deshawn Chico "D.C." Carver during a visit from his granddaughter narrates his experiences about when he owned what he refers to as one of the greatest amusement parks of all time.

Many years ago, D.C. was the crackpot owner of Action Point, a low-rent, out-of-control amusement park with dangerous rides. Despite the immense danger due to inexperienced and untrained staff, poorly designed rides, and minimal low quality maintenance, the park was popular with kids due to being the only amusement park around. However, during one season, a new amusement park, '7 Parks', with higher safety standards than Action Point opens up and begins to steal its clientele. D.C. is also pressured by his loan officer Knoblach into selling his land due to his failure to pay off a $100,000 loan which will be nearly impossible due to the new competition. Also, his estranged teenage daughter Boogie comes to visit and begins to help out at the park as a summer job.

One night, D.C. and his staff break into '7 Parks' to observe their competition and sabotage but trip the alarm and are nearly caught. D.C. realizes that he'll need to come up with something big to compete. After his first idea causes him to get blasted down one of his own waterslides, he has an epiphany and realizes that they need to start promoting Action Point as a park about stuff patrons can do, versus 7 Parks being about what they can't do. He decides to take off all safety procedures and brakes on rides in an attempt to make the park stand out, but this causes several people including himself to be horribly injured. Boogie also confesses to Benny that the real reason she's here is to get her dad to sign papers allowing for her mother's boyfriend to become her legal guardian.

As a publicity stunt, D.C. and the staff interrupt a local TV broadcast promoting the park as so chaotic it must be shut down, and this succeeds in bringing back customers, but sends the park into complete anarchy due to the lack of rules and regulations. At Boogie's advice, D.C opens up a kiddie land which is poorly designed and causes her to call legal authorities who deem the park dangerous and shut it down.

D.C. and the staff fix up the park and it reopens, but are told that the bank has foreclosed on the park and that they only have 10 business days to pay back the rest of the loan. To draw more people, they shoot a TV commercial, which they swap with a planned 7 Parks commercial after breaking into a local TV broadcast center. The plan works and they are overwhelmed with customers. Just as they are able to get on track to repay the loan on time, they are hit with a 2 million dollar lawsuit from an injured patron at the park forcing him to dedicate himself to his work. Upset that her father broke his promise to take her to a Clash concert, Boogie gets drunk with the staff and they all get arrested. After D.C. bails her out, she snaps at him and reveals about her intentions for him to sign the papers. The next day, he finds that she's left and learns from a janitor at the bus station that she may have left on a bus heading for Las Vegas. Desperate, he and Benny chase down the bus with their car but lose it after it collides with them.

D.C. realizes that she wasn't on the bus and tracks her to a restaurant. There, he explains that after he lost his family, the park became his new family and the reason he was so obsessed with it was because he didn't want to lose it as well. Unable to pay off his loan, he decides to blow up the park and sell off the land to Knoblach. To get back at him however, D.C. opens the park gates one last time distributing free beer to everyone as he is no longer liable for any damages that will occur from this action. The drunk patrons go wild and cause massive damage to the park, allowing it to go out in glory. Knoblach attempts to stop the patrons from destroying everything, but gets knocked out in the process. Late that night, the park is in shambles and the staff gathers one last time shooting fireworks everywhere to mark the end of an era.

The next day, as Boogie prepares to leave, D.C. proposes that the two of them instead take a road trip and during it stop in Austin where Clash is playing. Boogie is overjoyed and the former park staff offer to come along.

D.C. finishes his story as Boogie arrives home and he leaves after being told how much he means to both of them. He pretends to have a heart attack in the yard, but Boogie knows he is faking it and calls him on it as the two of them share a laugh.