View src
watch 02:24
Wiki Targeted (Entertainment)
Do you like this video?
Play Sound
After the Wedding 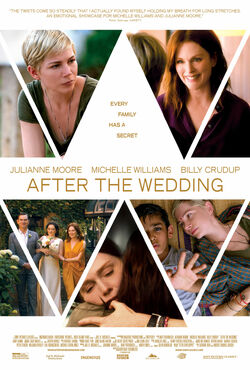 After the Wedding is a 2019 drama film written and directed by Bart Freundlich. The cast of the film consists of Julianne Moore, Michelle Williams, Billy Crudup, and Abby Quinn.

The film premiered at the Sundance Film Festival on January 24, 2019. It is scheduled to be released in the United States on August 9, 2019 by Sony Pictures Classics.

Isabel (Williams), a co-founder of an orphanage in Kolkata travels to New York to meet a potential benefactor, Theresa. Despite her frustration by the need to justify a charitable donation, she agrees to the meeting, which falls a day before the wedding of Theresa's daughter (Quinn). Isabel is unexpectedly invited to the wedding and the events that ensue force her to confront decisions she made 20 years ago as well as a man from her past, who turns up to be Theresa's husband. Secrets are also revealed including an unexplained charity worth 20 million dollars.