watch 01:56
The Loop (Movies)
Do you like this video?
Play Sound
Agyness Deyn 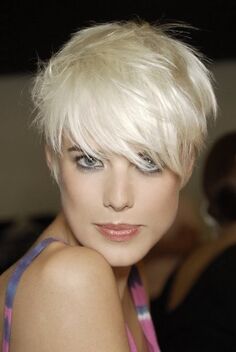 Deyn is from Littleborough in Lancashire. Deyn later moved to Failsworth near Oldham. The daughter of a nurse, Lorraine, and second of three children she moved to Rossendale, Lancashire, and attended All Saints Roman Catholic High School, as well as Bacup and Rawtenstall Grammar School and Sixth Form in Waterfoot, Rossendale.

Deyn's name was apparently coined to further her modelling career after she consulted her mother's friend, a numerology expert who advised her of the most 'fortuitous' way to spell the name 'Agnes'. It was reported that her mother Lorraine and sister Emily have both changed their surname to Deyn, while Lorraine has changed the I in her first name to Y.

Deyn's working life started at a fish and chip shop in Stubbins, Rossendale, where she was a part-time server at the age of 13. Even at an early age she had an eye for style and by 17 she had already had her head shaved. "I’ve had short hair since I was 13, and when I was 17, I had a skinhead." In 1999, she won the Rossendale Free Press "Face of '99" competition, aged just 16. She then moved to London, working in a fast-food restaurant during the day and a bar at night but admits: "It didn’t quite work." During this time she says she was also at college in Hull, studying drama and music.

Deyn's biography states that she was spotted while shopping with fashion designer Henry Holland in Kentish Town, London. She then signed with SELECT model management.

In May 2007, she was featured on the cover of American Vogue, alongside Doutzen Kroes, Caroline Trentini, Raquel Zimmermann, Sasha Pivovarova, Jessica Stam, Coco Rocha, Hilary Rhoda, Chanel Iman and Lily Donaldson as the new crop of supermodels. She has also been featured on the covers of: UK Vogue, the Observer Woman supplement, The Sunday Times Style, Pop, Grazia, Time, Style & Life, Vogue Italia and numerous other international publications.

In June 2009, the Daily Mirror reported that Deyn had quit modelling to spend more time with her then boyfriend, Singer-songwriter Miles Kane. The newspaper quoted a source as saying that modelling had started to bore Deyn and that she had hired an acting agent to pursue an acting career in British independent films.

In the 2010 film Clash of the Titans (2010), Deyn played Aphrodite, Greek goddess of beauty, love, and sex. In March 2011, Deyn appeared as an owl-bearing warrior in Woodkid's debut music video, "Iron".

In 2011, Deyn was cast in a remake of Nicolas Winding Refn's 1996 cult classic, Pusher, where she played a strong minded stripper.

On 28 February 2012, Deyn played her first role on the West End stage, as Paula in François Archambault's comedy, The Leisure Society. After receiving excellent reviews for her role in that play, Deyn has moved from the stage to the big screen and is set to play the main female role, Chris Guthrie, in a film adaptation of the iconic Scottish-set novel Sunset Song.

Retrieved from "https://movies.fandom.com/wiki/Agyness_Deyn?oldid=72567"
Community content is available under CC-BY-SA unless otherwise noted.