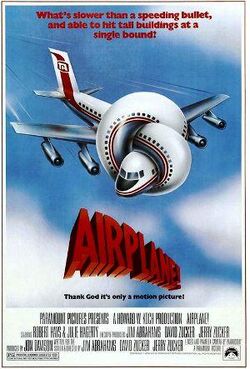 Airplane! (titled Flying High! in Australia, New Zealand, South Africa, Japan, and the Philippines) is a 1980 American satirical comedy film directed and written by David Zucker, Jim Abrahams, and Jerry Zucker and released by Paramount Pictures. It stars Robert Hays and Julie Hagerty and features Leslie Nielsen, Robert Stack, Lloyd Bridges, Peter Graves, Kareem Abdul-Jabbar, and Lorna Patterson. The film is a parody of the disaster film genre, particularly the 1957 Paramount film Zero Hour!, which it follows fairly closely, with superficial changes. For example, Ted Striker was Ted Stryker in the older film. The film is known for its use of absurd and fast-paced slapstick comedy, including visual and verbal puns and several gags.

Ex-fighter pilot and taxi driver Ted Striker (Robert Hays) became traumatized during an unnamed war, leading to his fear of flying. As a result, he can't hold a responsible job and his wartime girlfriend, Elaine Dickinson (Julie Hagerty), now a stewardess, leaves him. To win her back, Striker overcomes his fear and boards a flight from Los Angeles to Chicago that she is serving on (and leaving the taxi he was driving behind with a man inside). But during the flight, Elaine rebuffs his attempts.

After dinner is served, many of the passengers fall ill, and fellow passenger Dr. Barry Rumack (Leslie Nielsen) quickly realizes that the fish dinner gave some passengers food poisoning. The stewards discover that the cockpit crew, including pilot Clarence Oveur (Peter Graves) and co-pilot Roger Murdock (Kareem Abdul-Jabbar), have all come down with food poisoning, leaving no one aboard to fly the plane. Elaine contacts the Chicago control tower for help, and is instructed by tower supervisor Steve McCroskey (Lloyd Bridges) to activate the plane's autopilot, a large inflatable doll named "Otto", which will get them to Chicago, but will not be able to land the plane. Rumack convinces Striker to fly the plane, though Striker feels unable to handle the pressure and the unfamiliar aircraft.

McCroskey knows that he must get someone else to help talk the plane down and calls Rex Kramer (Robert Stack). Striker and Kramer served together in the war and must overcome their negative history. As the plane nears Chicago, Striker becomes increasingly stressed and can only land the plane after a pep talk from Dr. Rumack. With Kramer's endless stream of advice, Striker is able to overcome his fears and safely land the plane with only minor injuries to some passengers, and damage to the landing gear. Striker's courage rekindles Elaine's love for him, and the two share a kiss while Otto takes off in the evacuated plane after inflating a female companion.

After the credits, the man in Striker's abandoned taxi looks at his watch and says: "Well, I'll give him another 20 minutes. But that's it!"

Retrieved from "https://movies.fandom.com/wiki/Airplane!?oldid=171137"
Community content is available under CC-BY-SA unless otherwise noted.