Moviepedia
Register
Don't have an account?
Sign In
Advertisement
in: Articles with hCards, 1971 births, Male actors from Texas,
and 16 more 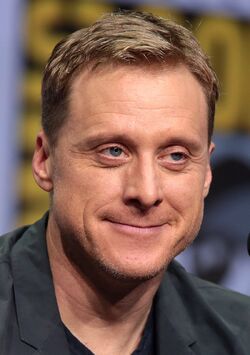 Alan Wray Tudyk (born March 16, 1971) is an American actor, and voice artist known for his roles as Hoban "Wash" Washburne in the space western television series Firefly and movie Serenity and Wat in A Knight's Tale. He currently co-stars on the ABC sitcom Suburgatory. He also had a starring role in the film 42 as Ben Chapman and voiced significant roles in the Disney animated films Wreck-It Ralph and Frozen.

Tudyk (pronounced Tude-ick) was born in El Paso, Texas, the son of Betty Loyce (née Wiley) and Timothy Nicholas Tudyk. His father is of Polish descent and his mother has German, English, and Scottish ancestry. He was raised in Plano, Texas, a suburb of Dallas, where he attended Plano Senior High School. He had a brief experience as a stand-up comic, before quitting after an angry audience member threatened to kill him. Tudyk studied drama at the Methodist-affiliated Lon Morris College in Jacksonville, Texas where he won the Academic Excellence award for drama. While in college, he played Beaver Smith in an eastern New Mexico summer stock theater production of Billy the Kid. Tudyk entered Julliard but left in 1996 before earning a degree.

Tudyk played Wat in 2001's A Knight's Tale, as well as Steve the Pirate in the 2004 comedy Dodgeball: A True Underdog Story and the emotional robot Sonny in I, Robot. In 2005, he reprised his role as the playful, easy-going Hoban "Wash" Washburne in the film Serenity, derived from the cult television series Firefly by Joss Whedon. In 2007, he had a supporting role as a strong-willed doctor in the western film 3:10 to Yuma alongside Christian Bale and Russell Crowe along with a brief but memorable role in the film Knocked Up and a highly physical comedic performance in the British film Death at a Funeral. Tudyk starred as Tucker in the indie horror comedy Tucker & Dale vs Evil. He also appears in Transformers: Dark of the Moon as Dutch.

In Alvin and the Chipmunks: Chipwrecked, he voiced Simone (a reckless French accent speaking Chipmunk, the result after Simon was bitten by a spider). In 2012, Tudyk appeared in Timur Bekmambetov's Abraham Lincoln: Vampire Hunter, in the role of Stephen A. Douglas. Tudyk also voiced the character King Candy in the 2012 Disney animated film, Wreck-It Ralph, a performance for which he won the Annie Award for Voice Acting. He plays Ben Chapman in the 2013 movie 42 about Jackie Robinson.

In 1999, Tudyk made his Broadway debut in Epic Proportions. He was also in Wonder of the World, The Most Fabulous Story Ever Told, Misalliance, Oedipus and Bunny Bunny. In 2005, Tudyk filled in for Hank Azaria's roles in Spamalot from June to December, and starred in a limited run of Prelude to a Kiss on Broadway.

Among Tudyk's better known roles was the playful, easy-going Hoban "Wash" Washburne in the television series Firefly by Joss Whedon. Although the series ran for only one season, Universal Studios bought the rights to the show and turned it into a film, Serenity, in which he reprised the role. He did a few voices from Make Way for Noddy.

Tudyk appeared as the cult leader, Father, in a two-part episode of Strangers With Candy entitled "Blank Stare." Among several guest spots on popular shows such as Arrested Development, he played a convicted pedophile on a popular episode of CSI: Crime Scene Investigation. Tudyk was cast as a special guest star in Joss Whedon's Dollhouse. The show featured people whose personalities had been erased, with Tudyk portraying Alpha, a former "active" who accidentally downloaded 48 separate personalities. Alpha served as the main antagonist of the series' first season, with guest appearances in the show's second season. Tudyk also guest starred in three episodes of ABC's modern remake of the television miniseries V. Tudyk provided the voice of superhero Green Arrow and villain Psimon in the animated series Young Justice. He is co-starring in the ABC comedy series Suburgatory as Noah Werner a dentist from the big city who moved to the suburbs.

Tudyk plays the voice of a Marine in the Xbox 360 game Halo 3. He is joined by his Firefly co-stars Adam Baldwin and Nathan Fillion who both voice Marines. All three actors are given personalities in the game matching those of their characters from Firefly. Tudyk made an appearance in Halo 3: ODST as the character "Mickey", an elite ODST (Orbital Drop Shock Trooper) who is part of the player character's squad as they try to escape a city invaded by the Covenant. He also reprised the voice of the DC Comics character Green Arrow in the game Injustice: Gods Among Us.