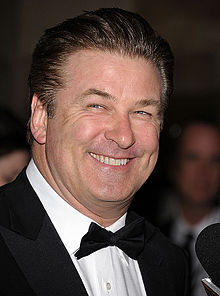 Alec Baldwin is an American actor for film, stage and television. He started his acting career on the soap opera The Doctors. His first film role was a minor role in the 1987 film Forever, Lulu. Currently he is most famous for his television portrayal of Republican, high-power executive Jack Donaghy in 30 Rock. He will soon be starring in Rock of Ages as Dennis Dupree. He is the brother of actors Stephen Baldwin, William Baldwin, and Daniel Baldwin. He has the most SAG awards of any male actor. He has won the most awards for the 2003 film The Cooler as Sheldon "Shelly" Kaplow.

Baldwin is a Democrat and a strong supporter of PETA and animal rights issues. He co-wrote the book A Promise To Ourselves, which is about his seven-year struggle to remain part of his daughter Ireland's life despite the wishes of his ex-wife Kim Basinger.