Start a Wiki
watch 01:16
The Loop (Movies)
Do you like this video?
Alec Guinness 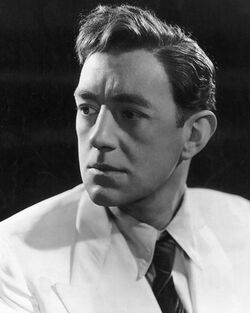 Alec Guinness he is considered one of the most beloved and influential actors of the 20th Century. His best known for playing Jedi Master Ben Kenobi in the Star Wars franchise.

Alec's initial screen role was as Pip's friend "Herbert Pocket" in Great Expectations (1946), which was adapted to the screen from the novel by Charles Dickens. Next came Oliver Twist (1948) and then a series of Ealing studio comedies that included the internationally popular Kind Hearts and Coronets (1949), in which Alec played the eight heirs to a dukedom; The Lavender Hill Mob (1951), with Alec as the mousy clerk turned bank robber; The Man in the White Suit (1951), with him as the chemist who invents a fabric that will never wear out; and The Captain's Paradise (1953), in which he played a lovable bigamist. Other famous films are The Bridge on the River Kwai (1957), for which he won the Academy Award for best actor; Lawrence of Arabia (1962), in which he played "Prince Feisal," and possibly his most famous and screen appearance: Star Wars (1977), in which he played "Ben Kenobi."

Later on, there was also Little Dorrit (1987), in which he played "William Dorrit." In 1980, he won a special Academy Award for memorable film performances. Alec also wrote dramatizations (The Brothers Karamazov and Great Expectations) and a film script of The Horse's Mouth and coauthored the play Yahoo (1976), in which he played the role of "Jonathan Swift."

Retrieved from "https://movies.fandom.com/wiki/Alec_Guinness?oldid=44469"
Community content is available under CC-BY-SA unless otherwise noted.