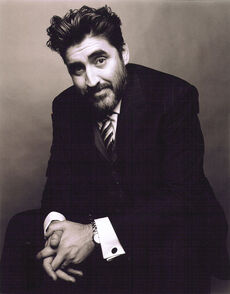 Alfred Molina (born May 24, 1953) is a British/American actor, whose first major film role of his career was Satipo Satipo in Raiders of the Lost Ark. He has had prominent roles The Man Who Knew Too Little, Spider-Man 2, Maverick, Species, Not Without My Daughter, Chocolat, Frida, Steamboy, The Hoax, Prince of Persia: The Sands of Time, The Da Vinci Code, Little Traitor, An Education and The Sorcerer's Apprentice.

Other notable films of his include Ladyhawke, Boogie Nights, Magnolia, Chocolat, Identity, Frida (for which he was nominated for a Best Supporting Actor BAFTA), and The Da Vinci Code. He also appeared as Snidely Whiplash, opposite Brendan Fraser, in Dudley Do-Right, and as a British inspector in The Pink Panther 2.