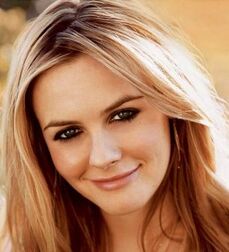 Alicia Silverstone is an American actress.

Alicia Silverstone was born in San Francisco, California, the daughter of parents from the United Kingdom - Deirdre "Didi", a Scottish-born former Pan Am flight attendant, and Monty Silverstone, a real estate agent born in England. She has two older siblings, a half-sister from her father's previous marriage named Kezi Silverstone and a brother named David Silverstone. She grew up in an upper-middle class home in the San Francisco suburb of Redwood City, California. She began modeling when she was six years old, and was subsequently cast in television commercials, the first being for Domino's Pizza. She attended Crocker Middle School and then San Mateo High School.

Her first credited role was in The Wonder Years starring Fred Savage in the episode entitled "Road Test", as Savage's high school "dream girl". Silverstone then won a leading part in the 1993 film The Crush, playing a teenaged girl who sets out to ruin an older man after he spurns her affections. Silverstone became legally emancipated at the age of 15 in order to work the hours required for the shooting schedule of the film.

After seeing her in The Crush, Marty Callner decided Silverstone would be perfect for a role in a music video he was directing for the band Aerosmith, called "Cryin'"; she was subsequently cast in two more videos, "Amazing" and "Crazy." These were hugely successful for both the band and Silverstone, making her a household name. After seeing Silverstone in the three videos, filmmaker Amy Heckerling decided to cast her in Clueless.

Silverstone's next role was as Batgirl in Batman & Robin. Silverstone's turn as Batgirl was not well received. Also released in 1997 was Excess Baggage, the first movie by Silverstone's production company, First Kiss Production. She starred alongside Benicio del Toro and Christopher Walken.

In 1999 Silverstone starred in the Saturn Award-nominated romance/comedy film Blast from the Past which also stars Brendan Fraser, Christopher Walken and Sissy Spacek.

n 2000, Silverstone appeared in Kenneth Branagh's film adaptation of the Shakespeare play Love's Labour's Lost, in which she was required to sing and dance. In 2001, Silverstone provided the voice of Sharon Spitz, the lead character in the Canadian animated television Braceface. In 2002, she made her Broadway debut alongside Kathleen Turner and Jason Biggs in The Graduate. After removing herself from the public eye for a few years, she resurfaced in the short-lived 2003 NBC television show Miss Match, which was canceled after 11 episodes.

In 2005, she co-starred with Queen Latifah in Beauty Shop, a spinoff of the BarberShop films, as one of the stylists in the beauty shop. In the same year, she played a reporter alongside Sarah Michelle Gellar and Freddie Prinze Jr. in Scooby Doo 2: Monsters Unleashed.

In 2006, she also starred alongside Alex Pettyfer, Ewan McGregor and Mickey Rourke in the film Stormbreaker, and appeared in the Hallmark Hall of Fame made-for-TV movie Candles on Bay Street, based on the book by Cathie Pelletier. Silverstone continued her theatre work, next appearing in David Mamet's Boston Marriage and Speed-the-Plow.

In 2010, Silverstone next starred in the teen romance The Art of Getting By, which premiered at the 2011 Sundance Film Festival. and appeared in four episodes of Suburgatory, reuniting with her Clueless castmate Jeremy Sisto. She will next appear in Butter as the adoptive mother of a 12-year old African American girl who enters a local butter sculpture competition in a small Iowa town.

She is also set to reunite with Clueless director Amy Heckerling in Vamps, playing one of two vampires who fall in love and face a choice that could jeopardise their immortality.