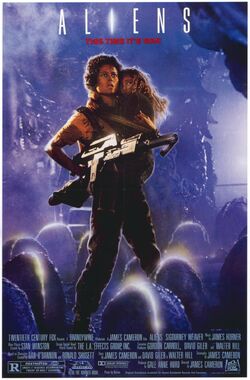 Aliens is a 1986 science-fiction action horror film written and directed by James Cameron, produced by his then-wife Gale Anne Hurd, and starring Sigourney Weaver, Carrie Henn, Michael Biehn, Paul Reiser, Lance Henriksen, William Hope, and Bill Paxton. It is the sequel to the 1979 film Alien and the second installment of the Alien franchise. The film follows Weaver's character Ellen Ripley as she returns to the planet where her crew encountered the hostile Alien creature, this time accompanied by a unit of space marines.

Brandywine Productions was interested in a follow-up to Alien as soon as its 1979 release, but the new management at 20th Century Fox postponed those plans until 1983. That year Brandywine picked Cameron to write after reading his script for The Terminator, and once that film became a hit in 1984, Fox greenlit Aliens, that would also be directed by Cameron, with a budget of approximately $18 million. The script was written with a war film tone influenced by the Vietnam War to contrast the horror motifs of the original Alien. It was filmed in England at Pinewood Studios and at a decommissioned power plant in Acton, London.

Aliens was a critical and commercial success, with critical acclaim that considered it an entertaining film that despite the tonal shift still served as a worthy sequel to Alien, and grossed $180 million worldwide. The movie was nominated for seven Academy Awards, including a Best Actress nomination for Sigourney Weaver, winning both Sound Effects Editing and Visual Effects. It won eight Saturn Awards, including Best Science Fiction Film, Best Actress for Weaver and Best Direction and Best Writing for Cameron.

Aliens is considered one of the best films of all time.

Ellen Ripley (Sigourney Weaver) is rescued after drifting through space in stasis for 57 years. She is debriefed by her employers at the Weyland-Yutani Corporation over the destruction of her ship, the Nostromo; they are skeptical of her claims that an Alien killed the ship's crew and forced her to detonate the ship. Ripley later learns that LV-426, the planet where the Nostromo encountered the Alien eggs, is now home to a human terraforming colony, called Hadley's Hope.

When contact is lost with Hadley's Hope, Weyland-Yutani representative Carter Burke and Colonial Marine Lieutenant Gorman approach Ripley about accompanying Burke and a Colonial Marine unit to investigate the cause of the disturbance. Traumatized by her previous encounter with the Alien, Ripley refuses, but relents after experiencing recurring nightmares about the creature; she makes Burke promise that they are going to destroy all of the Aliens. Aboard the spaceship U.S.S. Sulaco, she is introduced to the Colonial Marines, and the android Bishop, toward whom Ripley is initially hostile following her experience with the homicidal android Ash aboard the Nostromo.

A dropship delivers the expedition to the surface of LV-426, where they find the colony deserted. Inside, they find makeshift barricades and signs of a violent struggle, but no bodies. Two living facehuggers are found in containment tanks in the medical lab. They discover a traumatized young girl, nicknamed Newt, to be the lone survivor. Meanwhile, the crew uses the colony's computer to locate the colonists, finding all of them grouped together beneath the fusion powered atmosphere processing station. The group heads to the colonists location, descending into a series of corridors covered in Alien secretions. At the center of the station, the marines find the colonists cocooned, serving as incubators for the Aliens' offspring. When the marines kill a newborn Alien, the Aliens are roused and attack the marines, killing and capturing several. While the inexperienced Gorman panics, Ripley takes control of their vehicle and rams it through the nest to rescue marines Hicks, Hudson, and Vasquez. Hicks orders the dropship to recover the survivors, but a stowaway Alien kills the pilots, causing it to crash. Ripley, Newt, Burke and the remaining marines barricade themselves inside the colony.

Ripley discovers that Burke deliberately sent the colonists to investigate the derelict spaceship where the Nostromo crew first encountered the Alien eggs, believing he could become wealthy by recovering Alien specimens for use as biological weapons. She threatens to expose him, but Bishop informs the group of a greater danger: the power plant was damaged during the battle, and will soon detonate with the force of a 40-megaton thermonuclear weapon. He volunteers to crawl through several hundred meters of piping conduits to reach and use the colony's transmitter to remotely pilot the Sulaco '​s remaining dropship to the surface.

Ripley and Newt fall asleep in the medical laboratory, awakening to find themselves locked in the room with the two facehuggers, which have been released from their tanks. Ripley triggers a fire alarm to alert the marines, who rescue them and kill the creatures. Ripley accuses Burke of releasing the facehuggers so that they would impregnate her and Newt, allowing him to smuggle the Alien embryos past Earth's quarantine, and of planning to kill the rest of the marines in hypersleep during the return trip so that no one could contradict his version of events. The electricity is suddenly cut off and numerous Aliens attack through the ceiling. During the battle, Hudson, Burke, Vasquez and Gorman are killed, while Newt is captured.

Ripley and an injured Hicks reach Bishop and the second dropship, but Ripley refuses to leave Newt behind. She rescues Newt from the hive in the processing station, where the two encounter the Alien queen in her egg chamber. Ripley destroys the eggs, enraging the queen, who tears free from her ovipositor. Pursued by the queen, Ripley and Newt rendezvous with Bishop and Hicks on the dropship and escape moments before the colony is consumed by the nuclear blast. Back on the Sulaco, Ripley and Bishop's relief at their escape is interrupted when the Alien queen, stowed away on the dropship's landing gear, tears Bishop in two. Ripley battles the queen using an exosuit cargo-loader and expels it through an airlock. Ripley, Newt, Hicks and the badly-damaged Bishop then enter hypersleep for the return to Earth.

Test and pre-screenings were unable to take place for Aliens due to the film not being completed until its week of release. Once it was released in cinemas, critical reaction was generally positive to universal critical acclaim. Critic Roger Ebert gave the film 3.5 stars out of 4 and called it "painfully and unremittingly intense" and a "superb example of filmmaking craft." He also stated "when I walked out of the theater, there were knots in my stomach from the film's roller-coaster ride of violence." Walter Goodman of The New York Times said it was a "flaming, flashing, crashing, crackling blow-'em-up show that keeps you popping from your seat despite your better instincts and the basically conventional scare tactics." Time magazine featured the film on the cover of its July 28, 1986, issue, calling it the "summer's scariest movie". Time reviewer Richard Schickel declared the film "a sequel that exceeds its predecessor in the reach of its appeal while giving Weaver new emotional dimensions to explore." The selection of Aliens for a Time cover was attributed to the successful reception of the film, as well as its novel example of a science fiction action heroine. Echoing Time's assessment, Dave Kehr of The Chicago Reader called the film "one sequel that surpasses the original." Gene Siskel gave the film a negative review, describing Aliens as "one extremely violent, protracted attack on the senses" and that "toward the end, the film resorts to placing a young girl in jeopardy in a pathetic attempt to pander to who knows what audience. Some people have praised the technical excellence of Aliens. Well, the Eiffel Tower is technically impressive, but I wouldn't want to watch it fall apart on people for two hours."

Reviews of the film have remained mostly positive over the years. In a 1997 interview, Weaver stated that Aliens "made the first Alien look like a cucumber sandwich." In a 2000 review, film critic James Berardinelli said "When it comes to the logical marriage of action, adventure, and science fiction, few films are as effective or accomplished as Aliens." Austin Chronicle contributor Marjorie Baumgarten labeled the film in 2002 as "a non-stop action fest." Based on 48 reviews, the film holds a "Certified Fresh" rating of 98% on Rotten Tomatoes with an average critic score of 8.8 out of 10. The site's consensus reads " While Alien was a marvel of slow-building, atmospheric tension, Aliens packs a much more visceral punch, and features a typically strong performance from Sigourney Weaver". It also holds a score of 87 out of 100 ("universal acclaim") on the other major review aggregator, Metacritic.

Retrieved from "https://movies.fandom.com/wiki/Aliens?oldid=185323"
Community content is available under CC-BY-SA unless otherwise noted.