All the Money in the World

Edit
watch 01:23
Wiki Targeted (Entertainment)
Do you like this video?
Play Sound
All the Money in the World 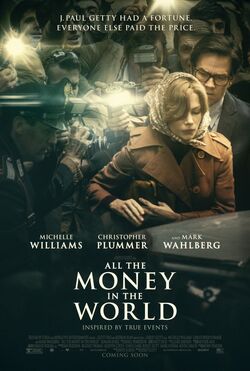 All the Money in the World is a 2017 crime thriller film directed by Ridley Scott. The film stars Michelle Williams, Christopher Plummer, Mark Wahlberg, and Romain Duris.

Actor Kevin Spacey was originally cast as J. Paul Getty, but was removed from the film and replaced by Christopher Plummer after sexual assault allegations were released about Spacey.

The film follows a kidnapping of 16-year-old John Paul Getty III (Charlie Plummer) and the desperate attempt by his devoted mother Gail (Michelle Williams) to convince his billionaire grandfather (Christopher Plummer) to pay the ransom. When Getty Sr. refuses, Gail attempts to sway him as her son’s captors become increasingly volatile and brutal. With her son’s life in the balance, Gail and Getty’s advisor (Mark Wahlberg) become unlikely allies in the race against time that ultimately reveals the true and lasting value of love over money.

On review aggregator Rotten Tomatoes, the film has an approval rating of 80% based on 80 reviews, with an average rating of 7/10. The site's critical consensus reads, "All the Money in the World offers an absorbing portrayal of a true story, brought compellingly to life by a powerful performance from Christopher Plummer." On Metacritic, the film has a weighted average score of 73 out of 100, based on 34 critics, indicating "generally favorable reviews". Audiences polled by CinemaScore gave the film an average grade of "B" on an A+ to F scale.