Moviepedia
Register
Don't have an account?
Sign In
in: 1976 films, Film articles without a specified rating, Films with live action and animation,
and 11 more

Allegro Non Troppo is a 1976 Italian animated film directed by Bruno Bozzetto. Featuring six pieces of classical music, the film is a parody of Walt Disney's Fantasia, two of its episodes being derived from the earlier film.[3] The classical pieces are set to color animation, ranging from comedy to deep tragedy.[4]

The uncut film also contains comic live action sequences, in black and white blended with occasional color animations, that parody the Deems Taylor introductions from Fantasia. "The Presenter" (Maurizio Micheli) starts off with an exaggerated version of Taylor's opening introduction in Fantasia ( "A new and original film" .. "you will see the music and hear the drawings" .. "a fantasia") only to be interrupted by a phone call from California informing him that the movie had already been done. He angrily objects, dismissing the caller as an ill-mannered liar, explaining to the audience that the caller claims that someone ("Prisney", "Grisney", "some American") had done this years before, then telling the caller to at least watch the movie and hangs up. Next the Presenter introduces "The Orchestra Master" (Néstor Garay) and an orchestra made up of little old ladies as the Orchestra Master roughly rounds them up into a large trailer for transport to the theater. As the trailer heads out to the theater the Presenter exults "Pisney has already done this?". Lastly before the first animated music segment (Prélude à l'après-midi d'un faune), the Presenter introduces "The Animator" (Maurizio Nichetti).[3] as the Orchestra Master retrieves him from a dungeon-like cell in which the Animator ("a free artist") is chained to a wall (as the Presenter puts it: "a binding contract based on trust and mutual respect"). A pretty young cleaning woman (Marialuisa Giovannini) also appears in each segment, although she's barely acknowledged by any of the characters except the Animator (who seems to take an increasing fancy to her as the movie progresses). Each sequence portrays action (like the tossing of a Coca Cola bottle) that leads directly into the next animated portion of the film and occasionally includes references to a previous segment (such as a chamberpot appearing on the Orchestra Master's head or the female bee and the serpent from their respective segments appearing briefly in the subsequent live-action sequences). After the "Ravel's Bolero" chapter, a gorilla (inspired by the animated character in the Bolero) also appears a few times, first chasing then dancing with The Animator, then later beating up the Orchestra Master who has attacked the Animator. After the Firebird sequence, the Animator transforms the cleaning woman into a cartoon fairy tale princess and himself into a prince before both float away leaving the Presenter and Orchestra Master without a finale leading into the epilogue sequence. 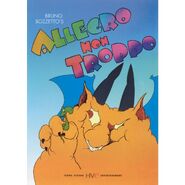 Wikiquote has a collection of quotations from or about:
Allegro Non Troppo
Community content is available under CC-BY-SA unless otherwise noted.