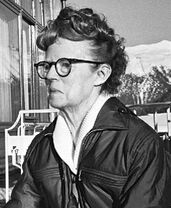 Alma Reville (a.k.a. Lady Hitchcock) was an English assistant director, screenwriter and editor. She was the second daughter of Matthew Edward and Lucy Reville.

She is best known as the wife of Sir Alfred Hitchcock, whom she met while they were working together at Paramount's Famous Players-Lasky studio in London, during the early 1920s. A talented editor, Alma worked on British films with directors such as Berthold Viertel and Maurice Elvey, though her main focus was her husband’s work. Cinema was the couple’s passion. Alma was one day younger than her husband.

They married on 2 December 1926 at Brompton Oratory in London; their daughter Patricia Hitchcock was born on 7 July 1928. Alma became his collaborator and sounding board, with a keen ear for dialogue and an editor's sharp eye for scrutinising a film's final version for continuity flaws so minor they escaped Hitchcock's own notice and that of his crew. It was Reville who noticed Janet Leigh inadvertently swallowing after her character's fatal encounter with Norman Bates' mother in Psycho (1960), necessitating an alteration to the negative. She was particularly good at revising dialogue and spotting inconsistencies in his plots.

Alma Reville died of natural causes at the age of 82, two years after Hitchcock's death. She had suffered from breast cancer some years before her death, but made a full recovery from the illness.


Retrieved from "https://movies.fandom.com/wiki/Alma_Reville?oldid=130764"
Community content is available under CC-BY-SA unless otherwise noted.