Start a Wiki
watch 01:27
The Loop (Movies)
Do you like this video?
Alpha and Omega 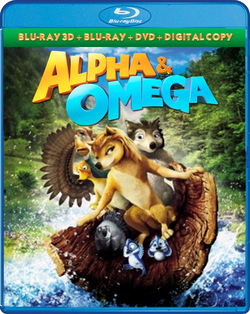 Alpha and Omega is a 2010 3D Canadian-American computer-animated adventure/comedy-drama film produced by Crest Animation Productions. The film is directed by Anthony Bell and Ben Gluck, starring the voices of Justin Long, Hayden Panettiere, Dennis Hopper, Danny Glover and Christina Ricci. It is based on a story by Steve Moore and Ben Gluck. The film was released in 2-D and 3-D on September 17, 2010 to 2,625 theaters nationwide by Lionsgate. Despite the mostly negative reception, the film was a box office success, making it the highest-grossing animated film from Lionsgate Films. Due to the box office success, a direct-to-DVD sequel, Alpha and Omega 2: A Howl-iday Adventure, was released on October 8, 2013, making Alpha and Omega the first film in a planned franchise. Another sequel, Alpha and Omega 3: The Great Wolf Games, was released on March 25, 2014. Alpha and Omega: The Legend of the Saw Tooth Cave was released on September 23, 2014. Alpha and Omega: Family Vacation is scheduled to be released to DVD in August 2015 and three more sequels are planned. The film was dedicated to the memory of Dennis Hopper, as this was his final performance prior to his death.

Retrieved from "https://movies.fandom.com/wiki/Alpha_%26_Omega?oldid=130703"
Community content is available under CC-BY-SA unless otherwise noted.