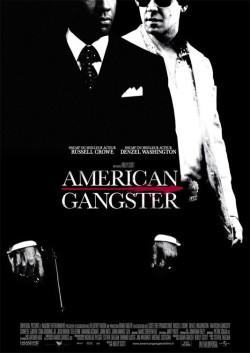 American Gangster is a 2007 crime film directed by Ridley Scott adapted from a New York magazine story "The Return of Superfly", by Mark Jacobson, starring Denzel Washington and Russell Crowe.

Washington portrays Frank Lucas, a real-life gangster from Harlem who smuggled heroin into the United States on American service planes returning from the Vietnam War. Crowe portrays Richie Roberts, a detective attempting to bring down Lucas' drug empire. Filming was done on location in New York City. American Gangster was released in the United States and Canada on November 2, 2007. The film was also nominated for two Academy Awards, including a notable Best Supporting Actress nomination for Ruby Dee who appears on screen for less than 10 minutes.

Retrieved from "https://movies.fandom.com/wiki/American_Gangster?oldid=186412"
Community content is available under CC-BY-SA unless otherwise noted.