Start a Wiki
watch 01:38
The Loop (Movies)
Do you like this video?
Amour 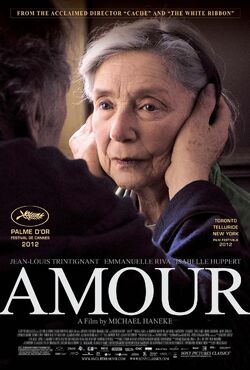 Amour is a 2012 French-language drama film written and directed by Michael Haneke. The film is a co-production between companies in Austria, France, and Germany. The film was screened at the 2012 Cannes Film Festival, where it won the Palme d'Or. It has been selected as the Austrian entry for the Best Foreign Language Oscar at the 85th Academy Awards.

In the film, Georges and Anne are in their eighties. They are cultivated, retired music teachers. Their daughter, who is also a musician, lives abroad with her family. One day, Anne has an attack. The couple's bond of love is severely tested.

Retrieved from "https://movies.fandom.com/wiki/Amour?oldid=74493"
Community content is available under CC-BY-SA unless otherwise noted.